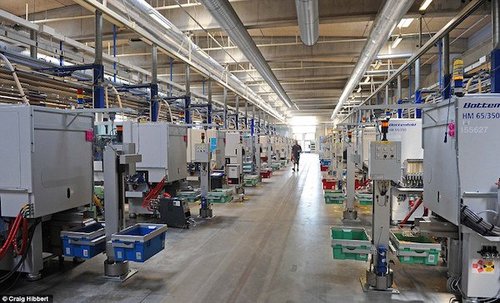 A lot of Christmas trees probably had Lego presents under them a few days back, but it was not Santa’s elves who produced the popular building blocks.

In fact, neither elves nor humans have much to do with the production of Lego stuff nowadays, because the automation force is strong in this company.

A recent Daily Mail story (Inside the ‘top secret’ Lego factory in Denmark, Dec 26) featured the new toys made for the Star Wars movie and mentioned in passing that the company employs more than 200 designers, but the manufacturing plants are “manned by robots but supervised by two people.”

In a related matter, the Denmark is moving toward border controls, as part of a growing rejection of borderless Europe amid the massive illegal alien crisis (one million in 2015!) incited by Germany’s Chancellor Merkel. Like the rest of the first world, European businesses are incorporating automation to streamline manufacturing. Denmark may well see the writing on the wall that immigrant workers are becoming obsolete, and hostile Muslims bring other problems.

Okay, back to the Lego factory, where even the cheerful narrator notices the lack of human workers:

In this hall, there’s over a thousand machines making the bricks 24 hours a day but there’s not a single person in sight. The machines melt the granules at 232 degrees Celsius, shake them, cool them down and then spit them out into the containers below, all in under 10 seconds. This rapid process helps Lego to make 1.7 million bricks every hour. That adds up to an enormous 15 billion a year. The factory is almost completely automated: when a container is full, a robotic car collects it and takes it to the storage hall. In the vast hall another automated system takes each crate to its specified shelf.