Christopher Caldwell does not write that many books—Google shows just a handful—but he is an insightful author. I wrote a review in 2009 for The Social Contract about Refections on the Revolution in Europe: Immigration, Islam and the West and found him unafraid to speak the obvious unpleasant truths about unwise diversity:

Christopher Caldwell gets off to a blunt start in his new book, Reflections on the Revolution in Europe, by declaring in the first sentence, “Western Europe became a multiethnic society in a fit of absence of mind.” The rest of the book shows how devastating that inattention has become, as the realization grows that devolution to Eurabia will be the demographically inevitable future if something is not done.

So a new Caldwell book, The Age of Entitlement: America Since the Sixties, is worth a look—particularly so when Tucker Carlson recommended it highly, as he did on a recent show. 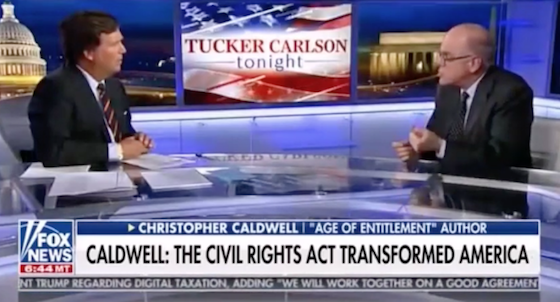 ne important point they discussed is that when government is allowed to have vastly expanded powers even for a laudable goal, such as ending segregation, those tools remain and may be used for less desirable ends, like giving illegal aliens rights that belong to citizens, not invaders.

In addition, I wonder how Caldwell views the current Victim culture, and whether the history he describes has encouraged the value of Victimhood rather than excellence in today’s society.

TUCKER CARLSON: So here’s a trend you may have noticed. You vote for something and it doesn’t happen. You wonder. We vote for it again and all your neighbors vote for it, then you read a poll saying the majority of the country is in favor of it.

But again, it doesn’t happen and this continues for say 30 years. And after you get frustrated and the country gets more volatile. How is this happening? Is our democracy real?

The smartest book I have read literally in years, it’s coming out today. It’s called The Age of Entitlement and it explains exactly what’s going on. It’s written by Chris Caldwell, one of the smartest people around, an opinion writer for the New York Times and he joins us on set.

Chris, great to see you.

CARLSON: So that’s the question, people are starting to think that democracy is not real because ideas that have majority support are ignored consistently. What is happening?

CALDWELL: Well, it’s a little bit complicated. I’d say it’s kind of an unintended consequence of a good thing, of the Civil Rights laws of the 1960s, which did away with segregation.

Now, segregation, as you know, it’s a big problem. It’s our unique — it’s our great problem in our history.

CARLSON: The original sin of America.

CALDWELL: Yes, that’s right. And it defied solution. How did we break it in the 1960s? We did it by giving Washington powers that it had had never had before in peacetime, right? It could, you know, it could overturn court verdicts. It could invalidate election laws. It could sue companies. It could break institutions. It was a really, really ruthless set of tools. And in the end, it worked.

CARLSON: It did work and I’ll just pause by saying most people would say that’s a good thing. I mean, that was awful. You don’t want that. And we ended it, and good for us.

CALDWELL: Absolutely. Okay. Here’s the problem. It’s that when legal segregation ended, these very powerful tools used to overturn it did not, and in fact, they intensified.

And you’ve got things that that were not even in the original Civil Rights Bills like affirmative action, as we understand it now. Busing of school children that spread. You had busing in Louisville and Boston.

So suddenly this reform that people thought of as confined to the, you know, the segregation of South was nationwide. But here’s the key thing and here’s where democracy comes in.

You know, you had women wanting to be admitted to men’s clubs. You had Hispanics who wanted to cast their ballots in Spanish, and when they brought forward these claims, they did not say — they were often too impatient to wait for a vote. They said, no, my rights are being abused.

It’s kind of like what was happening to the people in the south, and I don’t want to wait for a vote. I want immediate action. I want that system you used to break segregation in the south.

So you had a new system that gradually took over larger and larger parts of American life. It was like a second Constitution that could be used to override what you’d call the democratic.

CARLSON: So we’re presented with one half of this, which is the ends are good, like this is good, we like the outcome. But what you’re saying is the process put in place to achieve that outcome basically makes democracy itself impossible. So all of a sudden, everything is achieved this way.

CALDWELL: That’s what — more and more gets achieved this way. And as the years went on, you can sort of see this transformation. I mean, in the 1980s, you had an obvious instance, you had the Immigration Reform and Control Act, which was supposed to be a grand compromise that would regulate a big crisis in the country.

You had on the one hand, you had amnesty for several million migrants. But on the other hand, you had severe penalties for people who hired illegal migration, so it was supposed to solve the problem.

The problem was that asking migrants, whether they were legal or whether they were born in Mexico turned out to violate their Civil Rights. So you couldn’t do it. It was actually more dangerous for employers to enforce this law than it was to disobey it.

CARLSON: So we passed a law that couldn’t be enforced?

CARLSON: So what effect does this have on the country? If you believe that the country is calm, stable, and therefore prosperous, we have all those things we built on the base of that stability. If people start to suspect that they don’t have any control over their lives, someone they didn’t vote for is going to decide for them by fiat. What effect does that have on the society?

CALDWELL: Well, it seems it has a different effect on two halves of the society, and I think it really explains a lot of our polarization. Okay, if you have — I mean, if you’re a beneficiary of this new expansion of rights, okay, let’s say you’re a gay in a couple who can now get married.

But if you’re — if you’re not a beneficiary of this or if you’re conservatively inclined about any of these institutions, it looks less good.

CARLSON: So basically people who you never voted for telling you what to do, there’s literally nothing you can do about it. And so you get angrier and angrier, like people like Donald Trump, or whomever because you’re really frustrated.

CALDWELL: But there’s another thing that’s activating anger, too. And that is in order to — in order to use this rights-based system rather than the voting-based system, you need to convince the government that there’s some historic emergency going on, some terrible abuse, that someone is behaving wickedly in the same way that the southern segregationists and the southern sheriffs were.

And increasingly, that role of like official wicked person gets played by people who defend ordinary American institutions.

CARLSON: So you have the sort of permanent bureaucracy at war with its own people, with the public.

CALDWELL: That’s the way it feels to half the country.

CARLSON: It does. It feels that way to me. This is a really smart book, and I would recommend it to all of our viewers, Christopher Caldwell. Thank you so much for this.