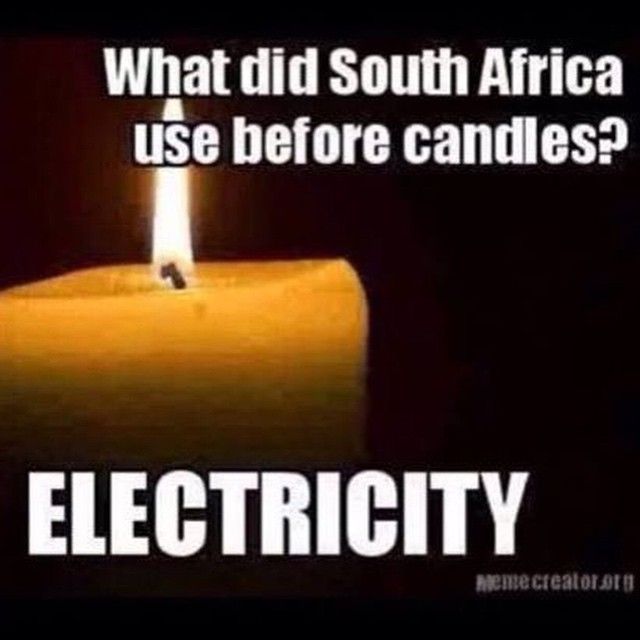 Twenty six years after the fall of Apartheid in South Africa and the implementation of black rule (a nation truly proving democracy is nothing more than a racial headcount), we get the consequences of a people rejecting whites and mistakenly believing they can maintain the civilization and infrastructure they have inherited.

Eskom was forced to implement stage 6 load shedding in December – its worst-ever blackout – sending the country into a panic as not many people were aware of what that stage actually meant for them.

Municipalities too were caught off-guard, with Johannesburg electricity distributor City Power saying at the time that it had no load-shedding schedule for Stage 6.

The year is 2020, and generation and maintenance challenges continue to mount at the state company which generates 96% of South Africa’s electricity.

As a result, all municipalities have been advised to adjust their load shedding schedule up to stage 8, the Buffalo City Municipality said in a statement on Saturday (11 January).

With each stage representing a curtailment of 5% of the national load, stage 8 will equate to 40% of the load being shed, the municipality said.

Under the previous load shedding schedule, four stages were implemented with between 1,000 MW and 4,000 MW of the national load shed – with ‘stage 4’ being the worst possible outcome for South African consumers.

Stage 4 will typically result in consumers being without power for a total of 24 hours spread out over four days, or a total of 48 hours over eight days.

However, Eskom has since revised its schedule to include up to eight different stages, and as much as 8,000 MW shed from the national grid.

During stage 8 load shedding, consumers could be without power for 48 hours over four days, or 96 hours in eight days.

Prepare for the worst

The energy availability factor shows the percentage of Eskom’s generation capacity which is available, taking into account planned maintenance and unplanned breakdowns.

Citing an ageing fleet that requires higher levels of maintenance, Eskom has warned that the power system remains vulnerable and volatile, adding that getting back to stability will take some time.

One score and less than a decade after the implementation of black-rule in South Africa, the nation is advancing toward de-electrification.

What a way to prepare to kick off Black History Month in the USA with such… electric news!

Wakanda, as we all know, isn’t real. Neither can western civilization or the advancements in technology by whites in South Africa be either maintained or even kept alive by a nation powered by the mandate of Black Economic Empowerment (BEE).

Remember, democracy is just a racial headcount, and though white people built South Africa (a nation once boasting nuclear weapons and the first heart transplant surgery), the now black-run nation is fueled by the black economic empowerment, which mandates affirmative action on behalf of the nearly 91 percent black residents of the nation.

Discrimination to benefit the majority, at the expense of the white minority… and the nation’s electrical grid.