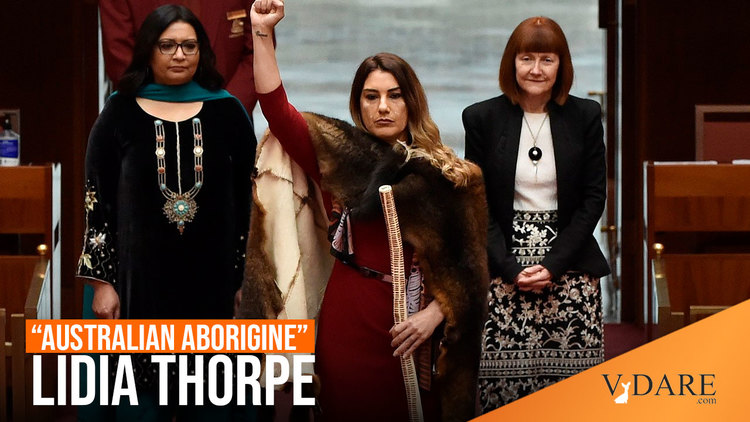 Earlier: They Ain’t Making Australian Aborigines Like They Used to

Lidia Thorpe, who identifies as Australian Aborigine of the DjabWurrung, Gunnai, and Gunditjmara tribes, has been in the Australian Senate since 2020.

On August 1 of 2022, she was taking a senatorial oath and made a spectacle of it, holding up a black power salute,  stating her name as ”I, Sovereign Lidia Thorpe” and by calling Queen Elizabeth ”the colonizing Her Majesty Queen Elizabeth” [Australian Senator Calls Queen Elizabeth a Colonizer While Taking Her Oath of Office, by Emily Burack, Town & Country, August 2, 2022]. Senate President Sue Lines was having none of it, interrupting Lidia‘s performance to tell her that ”You are required to recite the oath as printed on the card, so please recite the oath.”

The second time around, Senator Thorpe said the words correctly, but judging by her tone and gestures, not sincerely. (Video of incident available here.)

How much Aborigine blood does she actually have? (Here‘s a photo of her activist uncle.)

Steve Sailer has written about the phenomenon of white-looking Australians identifying as Aborigines, see articles here and here, and of course the link at the top of this blog entry.

(The photo at the top of this blog entry, by the way, is from Lidia Thorpe's first senatorial oath in 2020.  Looks like that was a spectacle also.)