Australia Continues to CRUSH Its Former Problem With Racial Gaps

Earlier: Meanwhile, in Australia, The Aborigines Are Looking Very Pale and How to Solve Your Racial Inequity Disparity

Many countries suffer the problem of one or more racial groups underperforming, such as blacks in the U.S., First Nations in Canada, and Muslims in France.

But Australia is well on its way to CRUSHING its former problem of Aborigines not being high achievers on average.

Okay, I know I’ve run with this joke before, but the sheer details in this article are a hoot:

Professor Mark McMillan, who hopes to serve as the City of Melbourne’s first Indigenous councillor, says his “big desire” is to see Aboriginal participation rather than tokenism in Australian politics.

The Wiradjuri man and public law academic is running as the third of nine candidates on lord mayor Sally Capp’s ticket for Melbourne Town Hall. Team Capp will need 30 per cent of the vote for him to win a place on the council.

If elected, Professor Mark McMillan would be the City of Melbourne’s first Aboriginal councillor.

“I was interested when Sally approached me to be on her ticket, because it wasn’t just, ‘I want diversity’ … it’s not about white virtue signalling,” he said.

“She actually wants people’s diverse lived experiences to be part of how we govern over the next four years. None of us feel like we’re token.” …

If Professor McMillan, a gay man who lives in Seddon with his partner and son, achieves his goal of serving on the council, it will follow a long list of personal and family firsts.

Although he lives in Seddon, which is in the City of Maribyrnong, as a director of a company in Carlton that tackles climate change issues, he is eligible to run for the City of Melbourne.

Professor McMillan was born in 1969 in Trangie, a small town west of Dubbo in NSW, and his grandmother was one of 16 siblings.

“Nan made us go to school because she wasn’t allowed to,” he said.

“She understood as an Aboriginal woman that education … has the capacity to transform lives.”

Between them, her grandchildren have 26 bachelor’s degrees, six master’s degrees and two doctorates.

He used his time at the University of Melbourne to research Indigenous human rights.

, served as a director of the former National Congress of Australia’s First Peoples and is a board member of the Trangie Local Aboriginal Land Council.

Before this, he served as an appellate judge in the Yaqui Court of Appeals, a Native American tribal court in Tucson, Arizona.

“I can’t disassociate … what I know about public law and Indigenous nation building and not bring that into the governing [of Melbourne City Council],” he said. … 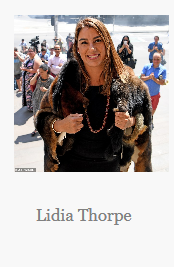 He has taken leave from RMIT amid an employment dispute. …

“And now, hopefully, rather than a white guy who wants that engagement, we’ll have an Aboriginal man who is steeped in understanding of social law,” he said. …

Cr Capp said it was also important that the city realise its ambition to put its Aboriginal heritage at its centre.

Professor McMillan said the appointments, and his candidacy, were exciting milestones for Aboriginal leadership.

What percentage of these high-achieving “Aborigines” (or in Professor McMillan’s case, “high-achieving” Aborigines) are descended from the Stolen Generations of mixed-race children who were given boarding school educations a century ago? As we all know, the Australian government taking the children of white men and Indigenous women away from their alcoholic, abusive, illiterate, and/or tubercular homes and educating them in the hope that their descendants could blend into the general population and live kick-ass lives in the 21st Century as Professional Quota-Fillers was the Worst Thing Ever.

"Lachlan McDaniel believes his arts degree was 'probably the best thing that ever happened' to him, but the Wiradjuri man fears new laws passed this week will make it much tougher for other Indigenous students to get the same opportunities."https://t.co/nnXf6dXxom

Keep in mind that the genes for Aboriginal Australian appearance have long been noted to be rather recessive, so that it’s usually harder to tell if a 1/8th or even 1/4th Indigenous person is Aboriginal than with, say, sub-Saharan ancestry. Here’s an old anthropology illustration of this: 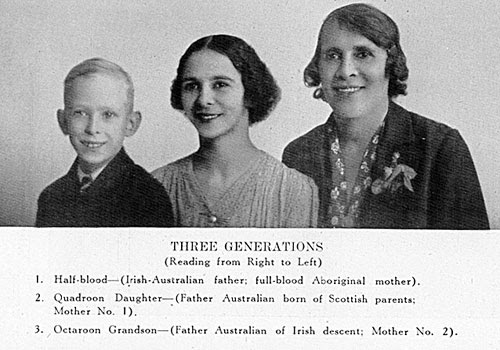 Before the development of antibiotics, full-blooded Australian Aborigines were dying off at a rapid rate from tuberculosis and other Afro-Eurasian diseases. The half-white children of Aboriginal mothers tended to be more resistant to diseases, but they tended to be neglected and abused by their often alcoholic Aboriginal relatives. So, reasoned the social workers, why not raise them in white ways in boarding schools, allowing them to find a place in white society and marry whites? Because Aboriginal looks tend to be relatively recessive when mixed with European looks, as compared to Sub-Saharan African looks, within a couple of generations you get a kid who looks like a cross between Prince Charles and Bing Crosby, so their descendants would be largely indistinguishable from the general population. Problem solved.

Of course, as we all know now, those reformers were The Worst People of All Time.

And yet, antibiotics aside, sensitive 21st Century Australians are better at feeling superior to their ancestors than at actually solving the problems that their ancestors confronted. For example, when Australian director Philip Noyce made the movie Rabbit-Proof Fence a decade ago condemning Evil Old Social Workers by showing girls who run away from their boarding school to return to their Aboriginal mothers, his adolescent star ran away from the set and had to be rounded up. Then when filming was over, Noyce saw what a disaster her Aboriginal home life was, so he ... paid to put her in a boarding school.