Auntie Mooch Gets to Stay a Few More Months (at Least) 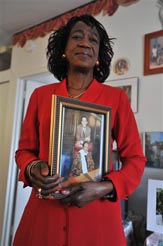 Oh, what a surprise. Nobody wants to kick Obie's freeloader aunt out of the country, so Judge Leonard Shapiro kicked the can down the road in a secret hearing until May. He is probably hoping for a wide-ranging illegal alien amnesty to solve his problem.

An immigration hearing for President Barack Obama's African aunt ended Thursday without an immediate decision in her second bid for asylum in the United States.

Kenya native Zeituni Onyango did not comment after testifying for about 2 1/2 hours Thursday at the closed proceedings in U.S. Immigration Court.

Wong said Onyango is hopeful the judge will rule in her favor because "she really wants to stay in America."

You bet she does! Auntie Mooch knows a good scam when she's found one, namely preying on the unprotected American taxpayer for goodies like a stipend from the city and subsidized housing, benefits supposedly not available to lawbreaking illegal aliens.

It's getting hard to pretend we are a nation of laws.