From my new Taki's Magazine column about the ex-spouses who are contending for the Best Director Oscar:

Is it a coincidence that in Kathryn Bigelow's The Hurt Locker the name of the hero, a technical genius who loves his job more than his wife, is "James?" Bigelow's great theme over the last two decades is male obsessiveness, and who embodies that more than James Cameron?

Or is it a coincidence that Bigelow rather resembles a real-life version of Sigourney Weaver’s Ellen Ripley, that classic nerd’s heroine in Cameron’s 1986 sci-fi film Aliens? Like Weaver (whom Cameron also cast in Avatar), Bigelow is almost six feet tall. (Unsurprisingly, Cameron, to whom too much is never enough, digitally rendered Avatar’s butt-kicking blue babe to be ten feet tall.)

Both Weaver and Bigelow are well bred, lady-like, and attractive, but Bigelow is also an expert at blowing stuff up. When doing publicity 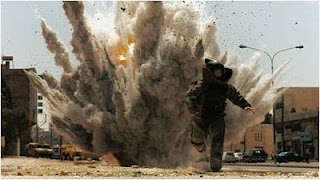 for Aliens and Avatar, the actress has had to bluff her way past all the fanboys who hope that Sigourney, who majored in English at Stanford, shares their techy obsessions.

Unlike Weaver, Bigelow is a real Ripley. For example, like the Explosive Ordinance Specialists specialists whom The Hurt Locker portrays, Bigelow disdains typical Hollywood gas fireball explosions. She strove to make her blasts ”a very dense, black, thick, almost completely opaque explosion filled with lots of particulate matter and shrapnel.”

Bigelow can talk explosions and lenses all day long. And that’s what The Hurt Locker is: soldiers filmed in Baghdad-like Amman, Jordan through telephoto lenses that deliver the exact opposite of Avatar’s famously immersive 3D.

The telephoto effect compresses the apparent distance between the near and the far. For instance, in this typical street scene, if an Improvised Explosive Device were concealed 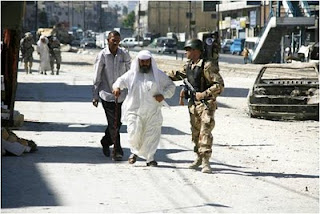 within that hulk of the car behind the U.S. G.I., would he be within the blast zone? The viewer can’t even guess how far away the car is from the soldier due to the telephoto lens foreshortening distance.

Thus, this art house action flick transpires in a disorientatingly flat and cluttered pictorial space. Bigelow’s telephoto shots keep the viewer from being able to discern what’s safely far away from the three heroes and what’s close enough to kill them, much like the potentially lethal environment confronting the soldiers as they try to disarm IEDs of unknown magnitudes.