The New Way Forward Act is a bill the WSJ editorial board, with its long history of advocating for open borders, should be honored to have helped give life to. From the text of the proposed legislation:

(a) Criminal Penalties For Entry At Improper Time Or Place.—Section 275 of the Immigration and Nationality Act (8 U.S.C. 1325) is repealed.

(b) Criminal Penalties For Reentry.—Section 276 of the Immigration and Nationality Act (8 U.S.C. 1326) is repealed.

The 35 initial sponsors of this open borders bill are demographically representative of new America, one in which border control of any kind is viewed as a fundamental aspect of white supremacy. The racial/ethnic breakdown of the legislators co-sponsoring the bill: 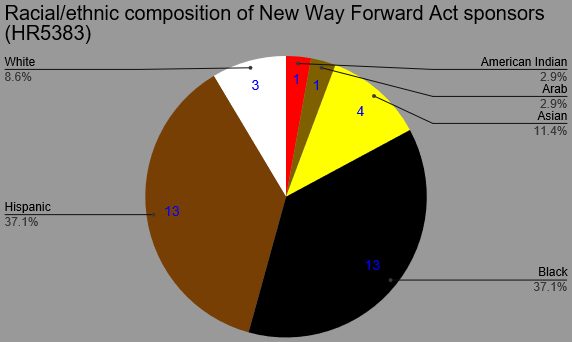 Of the Asians, three are East (one Chinese, one Taiwanese, one Japanese) and one is South (Indian). Of the whites, one appears to be culturally Protestant, one is Catholic, and one is Jewish.

The bill does more than decriminalize violating the country’s immigration laws. It also protects serious and violent criminals who have additionally violated those immigration laws from being removed from the country for having done so: