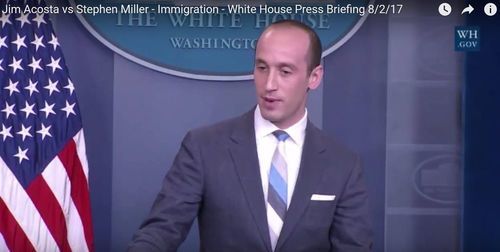 Attn: Stephen Miller—Trump Can Win The Border Fight In Two Weeks At No Cost (In Fact, Mexico Will Pay For It)

The Trump Administration has lost control of the border. Despite positive developments that followed his election, the President’s failure to deal with the first Caravan Of Death To America By Demographic Displacement ensured that the “zerg rush“ would only increase, which it did, resulting in the complete failure of today.

The sad part about this Trumpian failure is that there was no need for it. Not at all. While there are many costly measures to stop illegal immigration; build a wall, deploy the military to the border, impose a de facto E-Verify. There are also so no cost options to ending the zerg rush to the border by the caravans from all over the world.

In fact, the border crisis could be ended in two weeks. Let me tabletop this. The key is Mexico and its dependence on access to the United States for both its poor and rich citizens, as well as the access needed by commerce. Mexico today is not just an exporter of maquiladora produced goods, but a transshipment route for Chinese exports. Furthermore, in the border area, the poor Mexican population is dependent on illegal access to American schools, medical care, and employment. And better-off Mexicans, middle class and rich, like shopping in America and tourism. San Francisco Bay Area, Texas, and Southern California sports teams have a following of better-off Mexicans who will travel for baseball and football games.

There, my dear readers,  lies the leverage that America has over the Caravaners from all over the world using Mexico as a springboard to illegally enter the United States. And just how can America leverage this to solve the Caravan problem? It lies within the absolute executive authority the President has over the issuance of immigrant (IV) and non-immigrant (NIV) visas and the entry of said holders into the United States.

Here is the two week plan, I’m looking at you, Steve Miller, to impose upon Mexico a solution to the Caravaner problem.

Day 1: The President announces via Twitter that he has ordered the Department of State that effective immediately, no visa, immigrant or non-immigrant, will be issued to any Mexican citizen, national, or resident, until further notice. The President will then make the connection to the Caravans publicly known. The visas are being cancelled because the Mexican government allows third-country nationals to use Mexico to illegally enter the United States. The effect will be electric. Hundreds of such IVs and NIVs are issued to Mexicans each day. Immediately, those Mexicans affected by the halt will know not only why they are being denied a visa, but who is responsible, and they will vent their wrath on the Mexican government. The Mexican government is already unpopular for the mess the Caravans have brought to Mexico, and this will make the situation the Mexican government is in worse.

On Day 4, the President will announce that the provision of the Immigration and Nationality Act (INA) that allows for Mexican citizens with Official or Diplomatic passports that authorize the entry of their holders without a NIV is suspended indefinitely. This is a little known provision of the INA that Mexican officials use to freely enter the United States for personal business, tourism, etc. This gives them tremendous prestige in Mexico and good treatment at the border. Such passport holders are quite arrogant and enjoy this privilege immensely. The President can give the Mexican government a day to respond. If there is no response by Day 6, then more steps can be taken.

The President should give the Mexican government until Day 10 to comply with his demands. At this point the President must make it clear he is making demands of the Mexican government, not requests. At this point it will not be a negotiation between equals, but orders from the gringo. The time for face saving was within the first week of this plan. Now a little humiliation of President Andrés Manuel López Obrador (AMLO) is in order.

At this point, only commerce will be allowed through the POEs, but, for instance, Mexican truck drivers will not be allowed in. All cross-border traffic must be picked up by American drivers or American train engineers. This will not make cross border commerce impossible, but will cause maquiladora magnates hire American drivers to get their goods over the border. A win-win for President Trump and American workers.

Now AMLO will have three days to comply. On Day 13, if the Mexican Black Marias are not rolling to the border with Guatemala with their loads of third-country nationals, then the President will announce that all visas held by Mexican citizens and nationals are cancelled. He will also order all Mexican nationals in the United States on NIVs to depart immediately, including Maria Mendoza-Sanchez.

Now, by this time, the problem has either solved itself by Mexican cooperation, or now that land POEs are closed, those CBP Officers staffing the POEs can now be deployed to assist the Border Patrol arresting illegal entrants. But by this point, the Mexican government will have subserviently complied with President Trump’s demands that the problem with third-country nationals be solved to his satisfaction.

Further efforts will require real action, and enormous expense, but since Obama holdovers’ only solution to the crisis is  transporting fake asylum applicants  via “ICE Air Operations” into the interior of the United States, President Trump has nothing to lose. He can always militarize the border and build the wall. Nothing is lost by punishing Mexico for their connivance with the Caravans. The plus is if they don’t comply, we get fewer Mexicans. Win-win!