Above, the all-black View Park neighborhood is isolated far from opportunity

With the Obama Administration planning to liberate urban blacks from their ghettos isolated away from job centers by forcing suburbs and exurbs to build affordable housing for them, it’s worth studying one such virtually all-black neighborhood in Los Angeles County, View Park / Windsor Hills /Baldwin Hills. Here, America’s shameful history of systemic racism and the lack of affordable housing programs in the desert exurbs keeps blacks penned up far from opportunity, forcing them to endure crushing commutes of 8 miles to Beverly Hills, 9 miles to downtown Los Angeles, and 6 miles to LAX.

Homes snake along a ridgeline in View Park, where many homes have a commanding view of the Los Angeles Basin and the downtown L.A. skyline.

Longtime residents of View Park have a thinly veiled code for the signs of change they see in their upscale neighborhood: “joggers” … “dog walkers.”

“It’s like an alien sighting,” says Karen Martin, who grew up this hilltop community framed by La Brea Avenue and Crenshaw Boulevard. “We never saw them before.”

But now they are back. White people. With fluffy dogs. And fluorescent Spandex.

And for some longtime residents who cherish View Park as a symbol of African American success and a stronghold of black culture, that’s unsettling.

Residents of View Park, with its curving, palm-lined streets, stunning views and movie star quality homes, have for decades fought any proposal that they thought threatened their neighborhood’s special qualities — including its solid sense of African American identity.

Now a move that strikes many as an accolade — an effort to put View Park on the National Register of Historic Places — has blown up into a particularly contentious fight.

Some residents covet this honor for a community whose proud past is part of what makes it feel like home.

Others fear that the designation is a ploy to lure in white buyers who can no longer afford to turn up their noses at black neighborhoods now that Westside real estate has gone through the roof.

She graduated from Cal State Dominguez, married into a monied family, bought a starter home and, in 2003, finally worked her way up to an area some call the “Black Beverly Hills.”

When she moved into her 4,000-square-foot Mid-century Modern on a spacious corner lot, the woman who sponsored her as a teenage debutante proclaimed: “You have arrived.”

Later, Williams says, she and a friend stood on her new neighbor’s patio, feeling like Huxtables as they basked in the downtown skyscrapers’ evening glow. “We’ve made it!” Williams whooped.

In a way, she was speaking not just for herself but for African Americans more generally. 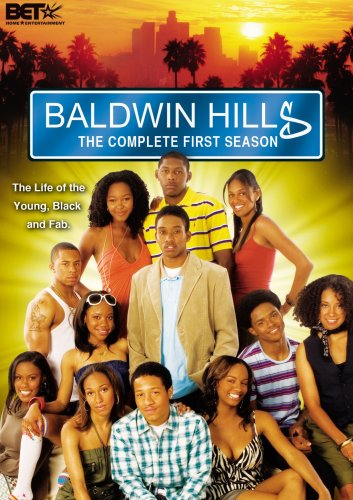 By the way, the “Black Beverly Hills” term for View Park / Baldwin Hills is hyperbole: this is an area of nice upper middle class hillside houses, but it’s very much a suburban housing development neighborhood rather than an area of Beverly Hills-like mansions.

I haven’t been here since 2007, before the Crash, but the quality of lawn care then was fanatical. My impression was that if you let your lawn get shaggy or brown, you’d be visited by a delegation of neighbors who would remind you about Property Values. Every single person I saw there on a Sunday was black, although I imagine there are lots of Hispanic gardeners about on weekdays.

It’s a lot like how Harvard sociologist William Julius Wilson described an all-black middle class neighborhood on the far south side of Chicago in his book There Goes the Neighborhood: a lot of genteel Afrocentrist / Black Pride-themed community events to serve the dual purpose of making both upscale whites and downscale blacks feel uncomfortable and unwelcome.

View Park was largely white into the 1960s. Then the Supreme Court lifted covenants [actually, 1948] that barred nonwhite homeowners, and the first wave of prosperous black families — lawyers, doctors and businesspeople — began to integrate the neighborhood.

As blacks moved in, whites fled, leaving 2,500- to 5,000-square-foot homes, some with maid’s quarters, pools and backyard views of downtown, Hollywood and the Pacific.

At a time when places such as Brentwood and Bel-Air made it clear that blacks were not welcome, entertainers including Ray Charles, Ike and Tina Turner, and dance/choreographer Debbie Allen flocked to View Park. Actress Loretta Devine and former Lakers star Michael Cooper still call it home.

Today, this unincorporated neighborhood of 1,700 custom homes is 84% African American,

From my visit to the adjoining Baldwin Hills hillside, I’d say that’s an underestimate of the demographic of the core area.

Half of View Park’s residents have earned a bachelor’s degree or higher, according to the 2010 census, and the tract that contains most of the neighborhood had an average family income of $90,000 — tens of thousands of dollars above the countrywide average for white families and 21/2 the median income among Los Angeles County blacks.

Some residents say that it’s because individuals and blacks as a group had to work so hard to win a place atop this hill that they fight so hard to maintain its character.

When urban planners decided to build low-income apartment buildings at the bottom of the hill, a group of residents defeated the plan. Residents blocked an effort to put restrooms in the local park because of fears that they would attract nuisances. Some have resisted the Crenshaw-LAX light-rail line out of concern that it will bring new people to the base of their quiet domain.

One group of residents says that it is this same concern of outsiders moving in and altering the cultural and architectural character of View Park that inspired them to band together as the View Park Conservancy and nominate their neighborhood as a historic district on the National Register of Historic Places.

Many residents say they welcome any change that makes their homes more valuable.

A determined group of opponents, however, accuse outside developers and house flippers of trying to snap up the homes of residents who have run into financial problems. The plan, they say, is to use the historic designation as a marketing tool to attract a new — and largely white — crop of buyers to View Park’s historic homes, some built by famed architects, that often sell for $100,000s less than those with comparable features a few miles west.

“Somebody found a gold mine and they are trying to milk it,” says musician Reggie A. Carson, 49. “Seniors happen to be the predominate demographic here and they are also the easiest to get rid of.”

Ben Kahle, one of the conservancy’s co-founders and a licensed real estate agent, did nothing to allay such concerns by posting a few of his thoughts about View Park in an online forum.

“My plan is to walk my dogs around . . . meet as many neighbors as I can, and to be seen as a friendly face,” he said in the 2013 post. “When the time comes, I’m thinking of having my wife bake some of her amazing cookies … and mention that I’d be interested in buying their homes.” …

Some black homeowners grabbed the low, adjustable interest loans that subprime lenders dangled before them to refinance their homes, researchers say.

Some used the equity in their homes as a down payment on other middle-class dreams such as business ventures, private schooling and investment properties.

Some fell behind on payments and their homes ended up in foreclosure. This occurred much more frequently in black communities, said Lance Freeman, a professor of urban planning at Columbia University and author of “There Goes the ‘Hood: Views of Gentrification From the Ground Up.”

According to a recent Zillow study, blacks are denied home loans at twice the rate of whites, and so it is more likely that banks, flippers and non-African American buyers will grab those foreclosed properties.

As they say, View Park is on the Wrong Side of History, evidently.

Author and analyst Earl Ofari Hutchinson, who lives in Windsor Hills, says that he understands why some of his View Park neighbors are sensitive to the arrival of new white residents — including those joggers and dog walkers.

“We have so few areas,” he says. “So little turf that we can call our own. This is yet another invasion by another group coming in to destroy both the culture, the lifestyle and the economic continuity of our area.”

“There were definitely tense moments, but that’s not uncommon,” said Katie Horak, a principal of the research group. “People get protective of their homes, as they should.”

For their part, opponents have passed out fliers calling attention to a website, StopGentrification.org. The home page offers this warning: “Historic preservation has been transformed into a real estate gimmick to start the gentrification process.”

In a Facebook discussion of the controversy, one opponent warned the conservancy that “View Park will not be colonized. . . I’m coming at you with FULL FORCE!!!!!!!”

The conservancy hired security for its next fundraising event.

The Los Angeles Basin will be one of the world’s great gentrification opportunities, with high risks / rewards, over the next several generation.

White Guilt means that Social Justice demands that blacks be helped Move to Opportunity from segregated ghettos in the inner city like View Park to integrated suburban locations, such as, say, Lake Los Angeles

Lake Los Angeles is indicated by the red pin on the map.

Judging from its name, Lake Los Angeles is conveniently near Los Angeles and it has (or at least had) a lake, so we must fight racism by empowering urban blacks to move away from inner cities where they’ve been victimized. Of course, a few white people might make a little money in the process, but that’s a small price to pay for fighting racism.