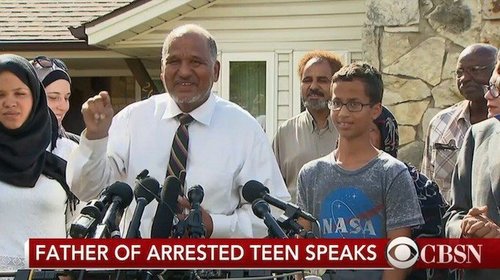 Radio Derb Is On The Air: How Did "Clockmaker" Ahmed's Family Come To Be In America, Anyway?

In this week’s podcast I cover the Muslim lad in Texas who took a ticking mechanism to school, got arrested, has been taken up by CAIR as a poster child for “profiling,” and copped an invitation to the White House from our Social Justice Warrior-in-Chief.

Pretty nice; but why is this kid living in our country? That’s not a rhetorical question; I’d really like to know.

The best I’ve been able to come up with, digging around, is that Ahmed’s father, who not only has “Mohamed” as a last name but also as a first name, came here as an immigrant thirty years ago. I haven’t been able to find out what category of visa he was admitted on. The sources describe him as, quote, “a former customs worker at Khartoum International Airport [who] earned a degree in philosophy from Cairo University in Khartoum,” end quote…

Not very surprisingly, Mohamed Mohamed’s degree was not accepted by U.S. institutions. That notwithstanding, he was allowed to remain in the U.S.A., where, we are told, he sold hot dogs, candy, and newspapers in Manhattan. I guess the U.S.A. was suffering from a dire shortage of hot-dog vendors that year. You know the narrative: jobs Americans won’t do, hot dogs rotting in the pushcarts, et cetera.