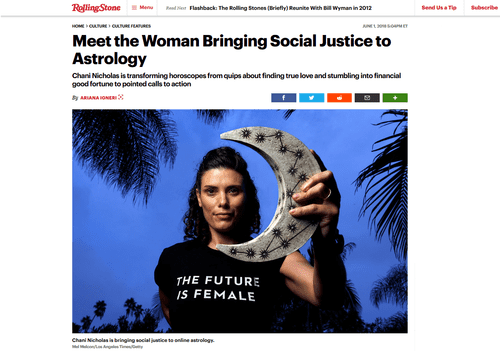 Astrology Is Back And SJWism Has Got It

Chani Nicholas doesn’t care for the hulking Alex Katz painting, depicting a trio of suited white men, hanging behind the front desk of the Langham hotel in New York. It reminds her of the patriarchy, she tells me one rainy, starless night in February, as we take the elevator up to her hotel suite and sit on the couch. We’re wrapping up a conversation about privilege, gender equality and the zodiac when Nicholas, who’s become popular on Instagram as a kind of social-justice astrologer, notices a different art piece hovering behind her. This one, she likes. The painting, titled “Mona,” portrays a woman who shares a striking resemblance to Nicholas – dark hair with tight curls, sharp brown eyes, a strong jawline. She compares it to the painting in the lobby. “The hotel staff must’ve known not to put me in a room with a bunch of weird guys on the wall,” she says. “I’m basically an angry feminist who just happens to be into astrology and healing.”

Nicholas, 42, is transforming horoscopes from generalizations about finding true love and stumbling into financial good fortune to pointed calls to action with a left-leaning, social-justice agenda.

I recall astrology becoming fashionable again at the end of the 1960s. It was part of the huge explosion of mass-market anti-rational silliness—spoon-bending with your mind, talking to plants, ancient astronauts, peyote shamans, pyramid power, etc etc—that ensued from the drugs and radicalism of 1968 and largely died out in the early 1980s.

It was a stupid era, but kind of fun. The new Ctrl-Left astrology, however, promises to be dumb, dictatorial, and depressing.