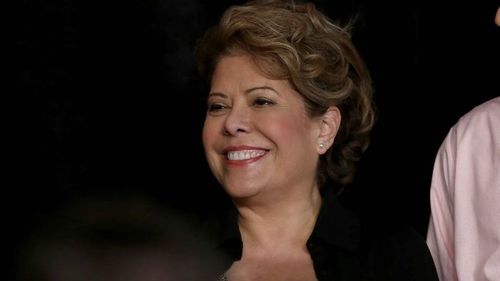 Assimilation, Bush-Style: “Columba Bush Is True To Her Mexican Heritage”

… Several Bushes were at the wedding [in 1974], but Columba had only her sister and mother, who didn’t understand a word of the ceremony. Columba spoke very little English herself.

There was no reception. …

By 1979, they were back in Texas. While campaigning for his father, Jeb met Florida developer Armando Codina. The two men discussed a commercial real estate partnership based in Miami.

“Jeb saw the possibilities of a nice life for us in Florida, so that was what we decided to do,” says Columba.

Miami has been home ever since. The pervasive Latin culture is a perfect fit for Columba, who adores Spanish soap operas and spicy food.

“It’s really comfortable here,” she says. “Everywhere I go, there is Spanish, so I never get to practice my English. That is the only problem.”

At home Jeb and Columba converse in Spanish. “When I speak English to him, he doesn’t understand me,” she says, laughing.

That would seem to imply the interview is being conducted in English, although it’s not specifically mentioned.

She pronounces her husband’s name as “Jabe.” Sometimes she will tilt her head heavenward and say “Thanks to God,” an Anglicized version of gracias a Dios.

Oddly, she has trained herself to pronounce her own name as cuh-LUM-buh, mimicking English speakers. In Spanish, it is co-LOOM-bah.

The Bush children know Spanish but don’t often use it, she says. “I speak Spanish to them and they answer me in English.” …

One of the kids was struggling with a drug problem, though neither Jeb nor Columba will say which one. …

This time around, the Bushes decided not to mix campaigning and raising a teenager at home. They enrolled Jebby, 14, at Bolles, a boarding school in Jacksonville. He started ninth grade this fall.

Another alternative explanation for her lack of giving interviews is that she doesn’t want to get questioned about her story that she was never an illegal alien, and that would be embarrassing for her husband’s prospects in the Republican primary, what with Jeb pledging lip service to outmoded Anglo concepts like “rule of law.”

Over the years, Columba has offered few details of her childhood. She said her father deserted his family in Mexico when she was small, leaving an impression that she never saw him after that and that she did not visit the United States until Jeb swept her off her feet.

“We don’t intend to relitigate the numerous offensive actions of a deceased man who abandoned his family in poverty while Mrs. Bush was a young child,” Bush spokeswoman Kristy Campbell said in an e-mail. “Mrs. Bush, her sister Lucila, and her mother have remained close and severed ties with him more than four decades ago.” …

As is often the case with broken families, there are conflicting versions of what went wrong.

Members of her father’s family in Mexico — a half-dozen of whom were interviewed by The Washington Post — insist that he was very much a part of Columba’s life when she was growing up. They say she visited him more than once in La Puente, Calif., outside Los Angeles, and even lived with him for a while in her late teens, as her romance with Jeb was blooming.

A cousin, Abdon Garnica Yebra, recalls picking almonds with her one weekend, when she visited California for the summer.

Columba’s father provided financial support and arranged for his daughter to obtain the legal documents she needed to settle in the United States, several relatives said.

Records indicate that Columba was issued a Social Security card in California in 1966 [when she was twelve or thirteen]. But it is not clear when she obtained a green card, and the Bushes declined to provide the date. …

So it sounds like Columba was at one point an Undocumented Worker, as they say.

Garnica’s relatives say she became estranged from him around the time she started getting serious about Jeb.

“When Columba met Jeb, she stopped talking to her father,” said Antonia Morales Garnica, 65, who was married to Jose Maria for 30 years until he died. “He suffered.” …

Columba has never met her father’s widow. “Mrs. Bush’s father’s second wife does not seem to know the full story, as what she said is incomplete and false,” said Campbell, the Bush spokeswoman.

Those who have heard Columba’s side, including author Parga, say Garnica tried to get in touch only after he realized his daughter had married into a famous family.

Another possible explanation is that her father remarrying caused a breach. That’s not uncommon. It’s pretty much human nature for children to be angry when Dad or Mom starts a second family that will compete for resources.

When Jeb announced to his family over Christmas in 1973 that he wanted to marry her, it “came as no surprise to us as Columba was the only girl he had ever dated,” his mother, Barbara Bush, wrote in her memoir. …

Meanwhile, Columba decided she would go to Southern California and live with her father, according to his relatives. She took a job in a factory that made parts for airplanes, Parga wrote.

Moving to this country also made it easier to be in touch with Jeb in Texas.

The version in Parga’s book goes like this: He came home from work, saw that Columba had been smoking a cigarette — which he forbade — and was so angry at her that he took off his belt and came after her. She said she locked herself in the bathroom until he left the house, then went to the bus station and began the long journey back to her home town in Mexico.

His relatives tell a different story: That she told Jose Maria she was going out to get the mail — and never came back. They assume that Columba left for Jeb, who they said had been calling while she lived in California.

On the other hand, Columba’s background isn’t as downscale as this makes it seem. Her mother had, apparently, married down, just as she (and her sister, who married another Andover boy, John Schmitz) married up. From “Columba Bush is true to her Mexican heritage” in the Ocala Star-Banner, May 5, 1999, by Lillian Guevara-Castro:

She was a sheltered teen-ager, the product of Catholic schools and a comfortable but strict religious upbringing. … “Columba was shy and liked poetry,” her sister [who married Jeb's Andover classmate] recalled. … They lived in a house owned by their maternal grandfather, a wealthy real estate developer. And their mother’s nanny showered the children with the love of a grandmother.

Columba was 16 when she met Jeb, which doesn’t seem too late in life to learn English moderately well.

Columba had completed two years of college in Mexico.

Her life, had she not met Jeb, would have been quite different. A lover of the arts and travel, she believes she would have first moved to Mexico City, known for its rich artistic culture, to soak in the intellectualism there.

Next, she says, “it sounds very avant garde, but I was going to live in Paris and be a fiction writer. That was my golden dream.”

That doesn’t sound all that different from the bookish Laura Bush, Jeb’s sister-in-law.

Anyway, Columba isn’t uneducated, she just doesn’t much like America.

There’s nothing idiosyncratic about that: most of the affluent class in Mexico are educated to dislike America to prevent American domination. Here’s my review of former Mexican foreign minister Jorge Castaneda’s book on the subject. For example, Castaneda, who had been in Washington negotiating an attempted amnesty deal with Colin Powell the week before 9/11, recounts that one of the things that doomed the Fox government’s ambitions was the relatively unsympathetic reaction of the Mexican public to the 9/11 tragedy:

“Quite simply, there was no outpouring of broad Mexican sympathy, support, and solidarity for the tragedy befallen its neighbor. Fox’s supposedly slow response would be forgotten; Mexican society’s coolness would not.”

Castaneda argues that the general mediocrity of Mexico is intimately tied up with Mexico’s anti-American attitudes. He calls for Mexicans to stop using the ethnic slur “gringo” as a key step toward Mexico being a less crummy country.

I don’t have any objection to Mexicans in Mexico fostering their culture of anti-Americanism — they cultivate an aversion to Americans to keep themselves from being reduced to banana republic status, as has happened to some of their southern neighbors. But it would be odd to have a First Lady in the White House with those kind of emotions.

Now Columba Bush has been to Paris, but no longer has time to write.

But does have time to shop in Paris, although not to pay import duty when she gets back to America.

Now all this would be kind of touching, in a pathetic way — two unimpressive people find each other — except that one of them is being promoted by the Establishment as the obvious, common-sensical Republican Party nominee for the White House.

On the other hand, Jeb’s marriage needs to be seen in the context of the history of Yankee expansionism. Yankee bachelors in the 19th Century had undermined local control in California and Hawaii by marrying into indigenous families.

In the 1850s, the shadowy Knights of the Golden Circle promoted predominance in Latin America down to the left bank of the Amazon. By 1898, however, northern Republicans led the way toward the banana republification of Latin America. Mexico’s 1938 nationalization of foreign oil interests was a major setback.

Intermarriage as a way to expand Washington’s empire was promoted after WWII by influential figures such as James Michener and Oscar Hammerstein II. The current President’s mother, a long time employee of the State Department and Ford Foundation, was no doubt exposed to such middlebrow views that encouraged her adventuress choices in husbands. President Obama can be viewed as blowback from this push by elites to expand the liberal empire through intermarriage.

The most dedicated resistance to the expansion of Yanqui influence has been, perhaps, in anti-American Mexico. Some Americans, such as the pre-Civil War Knights of the Golden Circle have long been interested in expanding American in Mexico and points south. Mexicans have long been wary that even seemingly profitable collaboration with the Colossus of the North could reduce them to banana republic status. 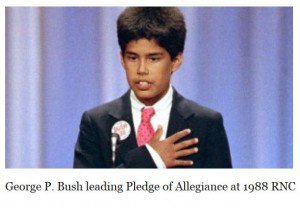 Of course, the 21st Century Bushes aren’t going to drape their hereditary push for more power in outdated 19th Century slogans like “manifest destiny,” they are instead going to play off contemporary emotions like white guilt and Diversity! to fulfill their enormous dynastic ambitions.

As an American oil man, George H.W. Bush was exposed to Mexican anti-Americanism when he had to hire Mexican front man Jorge Diaz Serrano around 1960 to evade Mexico’s laws against foreign involvement in Mexico’s oil business. Not surprisingly, one of the major initiatives of the GHWB Administration was NAFTA to break down Mexico’s economic barriers. Similarly, GWB entered the White House in 2001 intending to negotiate an amnesty and guest worker program expansion with Mexico City. And now Jeb’s Administration is intended to finish the process of incorporating Mexico within the New World Order economic and cultural empire, melding the two countries.

Granted, Jeb and Columba seem like less than titanic figures for such world-historical ambitions, but it’s their very mediocrity that makes them so peculiarly suited to represent the merger of America and Mexico that the Bush Dynasty has been inching toward over the decades.

Heck, in the long term thinking of the Bush Dynasty, Jeb’s Presidency would just be a building block for the George P. Bush Administration toward the middle of the 21st Century: