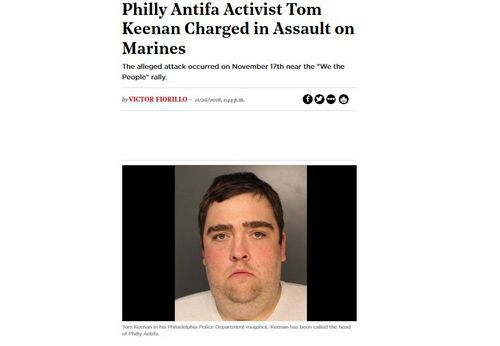 You haven't heard much about this from the Main Stream Media. As reported earlier, a group of Marines was allegedly assaulted, robbed, and called "Nazis" by a group of activists linked to antifa in Philadelphia.

He has been charged with two counts each of criminal conspiracy, aggravated assault, terroristic threats, simple assault, and reckless endangerment. Keenan, who was not charged with robbery, was released on bail and is scheduled for a preliminary hearing on December 6th.

A spokesperson for the Philadelphia Police Department says that the case is still open and that they continue to investigate the other suspects. Police have not released the identities of the accusers, and it is unclear whether they participated in the “We the People” rally or the counter-protest in any way...

In 2007, Keenan was arrested as one of the so-called “Love Park 4” after an incident involving a purported Ku Klux Klan rally in the well-known park near City Hall. He was charged with criminal conspiracy, institutional vandalism, resisting arrest, and criminal mischief, among other offenses, and eventually made a plea deal, pleading guilty to one summary offense of disorderly conduct, while all other charges were withdrawn.

Needless to say, this isn't the Narrative journalists want to push regarding antifa.

Author Victor Fiorillo is being slammed in the responses to his article for looking at "far-right websites" for information on Keenan. Yet this is a classic example of the double standard regarding antifa and the "far right." A whole host of journalists (dubbed "JournoFa") essentially operate as full-time antifa propogandists, covering up the ideological extremism and criminality of their crimes. One of the most recent examples was an article from Kelly Weill and Spencer Ackerman filled with faux indignation about the very idea that antifa hate the military.

Well, this case would seem to support that contention.

There has been very little coverage of the incident [Philly Antifa member in custody following attacks against U.S. Marine Reservists, by Sam Newhouse, Metro US, November 27, 2018]. The coverage of an alleged assault on Marines is nothing compared to the wholesale hysteria that results if a group like Identity Evropa places a flyer somewhere.  Press coverage will presumably intensify dramatically if the Marine Reservists are shown to have attended the "We The People rally" that was held before the robbery, which was a gathering of "Patriot" groups in support of law enforcement and against illegal immigration]. [What We Know About The "We The People Rally" Planned For Saturday, by Claire Sasko, Philly Mag, November 16, 2018 If that is shown, look for a spate of articles essentially justifying the assault. However, at this point, it's unknown if the Reservists attended the protest or were merely in the area.

The investigation is still ongoing and other suspects are still at large. Also, all suspects are presumed innocent until proven guilty in a court of law.