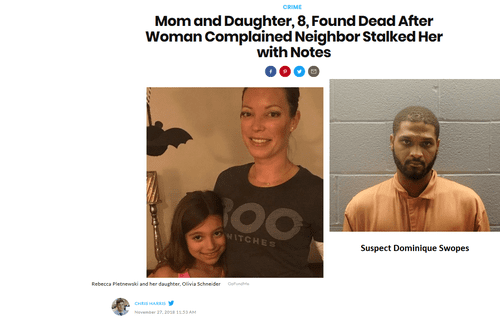 For months, Rebecca Pletnewski fearfully told family and friends her neighbor was stalking her. Now, the 41-year-old Ohio woman and her 8-year-old daughter are dead — allegedly murdered by that very neighbor, who police say stabbed Pletnewski to death before setting her house on fire, killing the little girl. …

The neighbor, 27-year-old Dominique Swopes, 27, has been charged with two counts each of aggravated murder and aggravated arson. …

“[Swopes] became a subject of interest,” Bittner said, “because what family and friends had told us, that Rebecca had warned them or told them of instances of potentially stalking by the neighbor. He became our primary suspect at the time after talking to family.”

But at least Becky apparently didn’t actually call the police herself on the black man. If this were 2017 instead of 2018, she might have been so problematic as to go to the cops about her stalker. So, don’t assume progress toward social justice is impossible.

Seriously, for an explanation of how the statistical concept of Type I False Positive) and Type II (False Negative) errors can improve the abysmal quality of media discourse on the 2018 Becky Crisis, see my Taki’s Magazine article “What’s Your Type?“