I don’t much care for the Bushes, but I tend to believe in the old maxim, de mortuis nihil nisi bonum, apropos of the death former FLOTUS Barbara Bush. So whatever opinions I might have of Mrs. Bush, I’ll keep them to myself, at least for a while.

Not so, one Randa Jarrar, [Email her] a “professor” Fresno State you’ve never heard of. And you’ll be glad you haven’t after reading some of her tweets about the late Mrs. Bush.

Jarrar, as you can see from her biography, is a crackpot leftist, or as one account put it, “a queer, Muslim, Palestinian-American and proud fat femme [who] lives the complexities of intersectionality.” That rather tells you everything you need to know.

Her Twitter feed says she is “on leave” and, understandably, is closed. Thanks to Twitchy for curating this crazy woman’s remarks.

Barbara Bush was a generous and smart and amazing racist who, along with her husband, raised a war criminal. F*** outta here with your nice words.

PSA: either you are against these pieces of s*** and their genocidal ways or you're part of the problem. that's actually how simple this is. I'm happy the witch is dead. can't wait for the rest of her family to fall to their demise the way 1.5 million iraqis have. byyyeeeeeeee.

Having invited something of a Tweetstorm, she reminded us that she is tenured, courtesy of California’s taxpayers:

sweetie i work as a tenured professor. I make 100K a year doing that. i will never be fired. i will always have people wanting to hear what i have to say. even you are one of them! https://t.co/AMx9onyMD9

According to the Fresno Bee, Jarrar shut down her Twitter account after it became clear that bashing Mrs. Bush wasn’t such a bright idea. 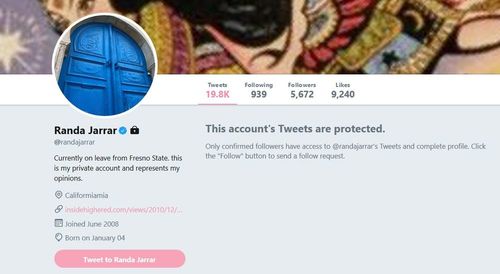 Why she is “on leave” we are not given to know. The story says nothing about Fresno State’s reaction, except to include the boilerplate apology from its president.

Let’s get a look at who this Muslim lesbian really is: another ungrateful child of immigrants.

Randa Jarrar was born in 1978 in Chicago to an Egyptian & Greek mother and a Palestinian father. She grew up in Kuwait and Egypt. After the Gulf War in 1991, her family moved back to the US, living in the New York area when she was 13. Jarrar studied creative writing at Sarah Lawrence College, receiving an MA in Middle Eastern Studies from the University of Texas at Austin, and an MFA in Creative Writing from the University of Michigan. She has taught College Writing, Creative Writing, and Arab-American literature.

I don’t know what the heck “Arab-American literature” is, but I do know it’s time to close the borders.