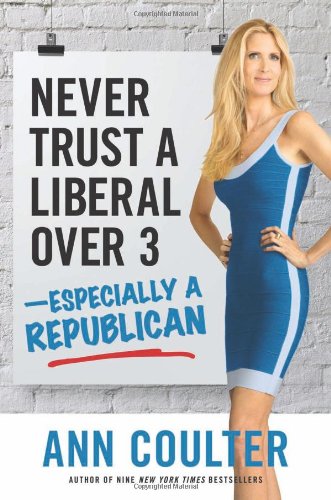 We feature a picture and link to Ann Coulter's latest book Never Trust a Liberal Over 3-Especially a Republican every time we post her column. We aren't just posting that because the blue-and-white dress catches the eye, but because of the content of the book.

Ann Coulter is still saying things about public policy that no other conservative pundit is willing to say, and many are actually speaking out against.

This is the intro (with links added by me) to Chapter 11 of Never Trust a Liberal,  just look at the title:

Why do we have to keep telling elected officials the same thing? We really don’t want amnesty for illegal aliens. Americans made this resoundingly clear in 2007 when President Bush and John McCain, along with their pals Teddy Kennedy and Chuck Schumer, first tried to foist a “path to citizenship” on us. Amnesty was supported by the president’s acolytes at the Fox News Channel as well as a nearly monolithic Democratic Party and its acolytes at ABC, NBC, CBS, CNN, MSNBC, MTV, Oxygen TV, the Food Network, the Golf Channel, the Home Shopping Network, the in-house “Learn to Gamble” channel at the MGM Grand in Las Vegas, and Comedy Central (unless that was just a sketch on the Mind of [Carlos] Mencia).

But ordinary Americans had a different idea. Their idea was: let’s not reward lawbreakers with citizenship. The only “path to citizenship” the public wants involves making an application from Belgium, waiting a few years, and then coming over when it’s legal. Americans were so emphatic on this point that they forced a sitting president to withdraw his signature second-term legislation.

So why did we get the exact same amnesty bill from Senator Marco Rubio in 2013? Rubio had campaigned as a Tea Party warrior. Back when he needed votes, he denounced his opponent, then-Governor Charlie Crist, for supporting the McCain plan.

“I think that plan is wrong,” he said, denouncing amnesty  An “earned path to citizenship,” he said “is basically code for amnesty.”

And then he got to Washington and his big legislative initiative was . . . a path to citizenship for illegal aliens! Yes, Rubio’s plan to solve the problem of illegal immigration from Mexico is to bring them all here. Is it something in the water in D.C.? Whenever these Republicans need our votes, they’re bellicose supporters of the people against the powerful on illegal immigration. Then they get elected and dedicate themselves to helping powerful business interests import millions of low-wage immigrant laborers.

Amnesty is so hated by Americans that even the Democrats are constantly being caught flat-footed on the issue. At a Democratic presidential debate in October 2007, Hillary Clinton took both sides of New York governor Elliot Spitzer’s plan to give illegal aliens driver’s licenses. First, Hillary said she supported the idea, but within two minutes said she opposed it. In response to a direct question, she refused to clarify her position on driver’s licenses for illegal aliens.

The next day, Hillary issued a press release endorsing Spitzer’s proposal. Elected Democrats throughout the state began denouncing the plan. Polls showed that 70 percent of New Yorkers opposed it. Even the New York Times would call driver’s licenses for illegals “Mr. Spitzer’s single most unpopular decision since he took office.” (This was before the hookers.) Two weeks later, Hillary announced she was against it.

Guess who had that great idea first? Governor Jeb Bush of Florida! Bush ferociously pressed the legislature to approve driver’s licenses for illegal aliens—four years AFTER the 9/11 terrorist attack, in which all four pilots had used Florida drivers licenses to board the planes. Fortunately, the state legislature ignored him. (And Jeb’s supposed to be the smart one.)

So we return to an immigration system under which it is impossible for a French, German, or English person to immigrate here, but illegal aliens demand legal status so they can bring all twelve of their siblings to America, rather than just the seven already here.

So buy, and read the book--the first piece after the intro is "America Nears El Tipping Pointo", for which she was attacked by "Cafe Con Leche Republicans"—a group headed by a guy named Bob Quasius in Minnesota, who apparently qualifies because he's married to a Hispanic, but has the same "no sense of humor" as if he were an actual minority.