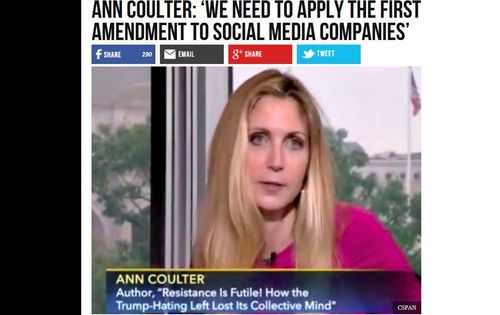 Ann Coulter is out with a new book, Resistance Is Futile, which obviously everyone should get immediately. In a recent appearance on Washington Journal, she called for applying the First Amendment to private companies.

We need to apply the First Amendment to social media companies like Twitter, Facebook, and Google, because it is a public square, and there is precedent for that and it’s gotta be done, because this is really terrifying, and talk about chilling speech when they’re just throwing people off right and left.

Some other conservatives also seem to understanding that regulation of social media companies is the only way this problem is ever going to be solved. Dennis Praeger, who I've mocked as a typical blinkered "movement conservative" in the past, even had some good things to say.

Prager went on to make the analogy of an airline that announces that if you get on its planes carrying the Wall Street Journal you will not be allowed to fly, but it is fine to carry the New York Times onto the plane, which he says House Majority Leader Kevin McCarthy considers a sound analogy to the actions of Silicon Valley. Prager does believe “we can prevail,” agreeing with [Breitbart Editor-in-Chief Alexander] Marlow that there is a clear case for federal regulation of tech monopolies much like airlines and other common carriers.

[Dennis Prager: 'We can prevail' over Silicon Valley with regulation, by Lucas Nolan, Breitbart, August 22, 2018]

Perhaps more importantly, Ann Coulter also decried the current journalistic practice of assigning guilt-by-association, or, as we've noted, sometimes even guilt-by-non-association. And she made a pretty direct reference to the Two Minutes Hate being waged against Peter Brimelow.

Everything that liberals fantasized Joe McCarthy was doing is being done, now. We’re throwing you off Twitter — or out of the White House — because you once went to a meeting with someone who said something online and he also published someone on the same web page which we find offensive. It is such a guilt-by-association. I’ve never seen anything like it in my lifetime.