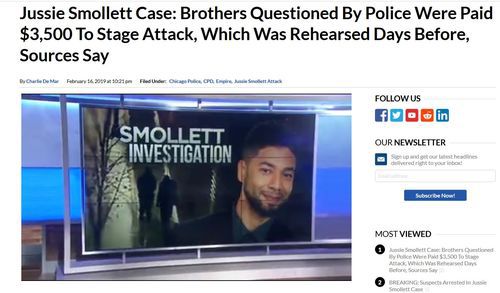 From CBS News in Chicago:

Jussie Smollett Case: Brothers Questioned By Police Were Paid $3,500 To Stage Attack, Which Was Rehearsed Days Before, Sources Say

CHICAGO (CBS) — Jussie Smollett paid two brothers to stage an attack against him, directed them to buy items used in the alleged assault and actually rehearsed it with them, sources say.

Sources say at least one of the brothers bought the rope used in the incident at Smollett’s request. The sources also say the “Empire” actor paid for the rope, which was purchased at the Crafty Beaver Hardware Store in the Ravenswood neighborhood the weekend of Jan. 25.

The brothers, who were questioned by police this week before being released, were paid $3,500 before leaving for Nigeria and were promised an additional $500 upon their return.

They left for Nigeria later in the day on Jan. 29, after the attack.

Sources said one of the brothers held the rope and poured bleach while the other wore a plain red hat and yelled slurs at Smollett.

The sources say the red hat was bought at an Uptown beauty supply store and that the attack was supposed to happen before Jan. 29. The brothers told detectives the three men rehearsed the attack days prior to it happening.

A question: What is the point of going to all the trouble of staging a false flag attack if you don’t get video of it? Did Jussie assume that cameras cover every spot in super-high density Streeterville (near Chicago’s Navy Pier) and he just happened to pick the one place without video coverage?
[Comment at Unz.com]