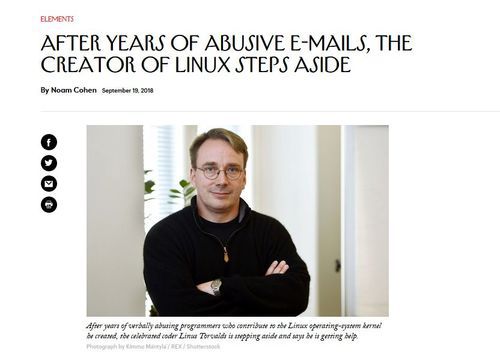 And They Came for Somebody Who Actually Gets Things Done: Linus Torvalds

One aspect of the #MeToo phenomenon initially was that it tended to take down seemingly still powerful but now over the hill jerks, such as Harvey Weinstein.

I recently watched part of one of Harvey’s last movies, Tulip Fever, which was a huge flop, even though it probably would have been a hit if he had released it in the 1990s. It had all the hallmarks of Weinstein’s Oscary old movies — Judy Dench cameo, Tom Stoppard screenplay, interesting historical setting (17th Century Amsterdam at the time of the Tulip Mania and the peak of Dutch painting), and lots more nudity and sex than other 2010s movies. But there isn’t much market for these kind of middlebrow grown-up films anymore, plus everybody of a certain age and 3 digit IQ has already seen a million Weinstein-type movies so there are few surprises (although Christoph Waltz is pretty funny as the kindly burgher widower who marries orphan Alicia Vikander).

Guys like Weinstein, age 66, used to often drop dead of heart attacks in their 60s, but now they hang around along time unless they get pushed.

A couple of things are are now going on is that #MeToo is expanding to include completely nonsexual behavior by cishet white men, such as Finnish-American computer genius Linus Torvald, founder of Linux, calling suggested changes in his operating system “crap.” From The New Yorker:

After Years of Abusive E-mails, the Creator of Linux Steps Aside
By Noam Cohen September 19, 2018

… Torvalds has publicly posted thousands of scathing messages targeting programmers who submit what he deems flawed code to the Linux computer-operating-system kernel, which he brought to life more than twenty-five years ago and now administers as a collaborative, open-source project. Today, the Linux kernel is famous, running the enormous computers of Google, PayPal, Amazon, and eBay, and the two billion mobile phones using the Android operating system. Torvalds, though, retains final say over each precious line of code, just as he did when he first started working on the system as a graduate student at the University of Helsinki. For years, he has been known as Linux’s “benevolent dictator for life.”

On Sunday, the benevolent dictator announced that he would be stepping down temporarily, to “get some assistance on how to understand people’s emotions and respond appropriately.” Torvalds, who is forty-eight and lives with his family outside Portland, Oregon, made clear that he wasn’t burned out. “I very much do want to continue to do this project that I’ve been working on for almost three decades,” he wrote in a post to the Linux-kernel mailing list. “I need to take a break to get help on how to behave differently and fix some issues in my tooling and workflow.” Torvalds named a deputy, Gregory Kroah-Hartman, to run the project while he was away.

Torvalds’s decision to step aside came after The New Yorker asked him a series of questions about his conduct for a story on complaints about his abusive behavior discouraging women from working as Linux-kernel programmers.

Torvalds’s response was conveyed by the Linux Foundation, which supports Linux and other open-source programming projects and paid Torvalds $1.6 million in annual compensation as of 2016.

$1.6 million per year is not a vast sum for one of the software giants of the age.

… Linux’s élite developers, who are overwhelmingly male, tend to share their leader’s aggressive self-confidence. There are very few women among the most prolific contributors, though the foundation and researchers estimate that roughly ten per cent of all Linux coders are women.

Obviously, we must encourage women and underrepresented minorities to go into open source programming rather than to work for-profit companies because …

Also, obviously it’s crucial to have diverse programmers working on Linux because …

And of course Linux couldn’t possibly be successful without The Diverse because … oh, it is incredibly successful, you say? Well, then it must become Diverse to stop being a bad example.

For a research project, Squire used e-mails from Torvalds to train a computer to recognize insults. According to Squire’s tabulations, more than a thousand of the twenty-one thousand e-mails Torvalds sent in a four-year period used the word “crap.” “Slut,” “bitch,” and “bastard” were employed much less frequently during that period. Squire told me that she found few examples of gender bias. “He is an equal-opportunity abuser,” she said. Squire added, though, that for non-male programmers the hostility and public humiliation is more isolating. Over time, many women programmers leave the community. “Women throw in the towel first,” she told me. “They say, ‘Why do I need to put up with this?’ ” …

In 2013, Sharp, who is nonbinary and uses “they/them” pronouns, confronted Torvalds on his home turf—the public Linux kernel mailing list.

And then there’s another M-to-F in the story, but, as we all know, no M-to-F could possible be brusque or lack empathy because they are not Cishet White Males. For example, I was on a 4-person team for a couple of months in the early 80s with a man who is now listed as the Highest Paid Female CEO in America. Our two teammates, one a white male the other a Mexican woman, considered him (now her) to be a giant prick. But obviously, they were wrong because reasons.