t was a shock to hear Wednesday morning about the death of evangelist Billy Graham at age 99. Death at such great age shouldn’t be a surprise, but Rev. Graham was such a fixture in American life, it’s hard to think of him being gone.

How powerful was Graham as a spiritual influence? His message could change lives.

A year ago I read the book Unbroken about the athlete and WWII hero Louis Zamperini who ran in the 1936 Berlin Olympics and spent 47 days adrift in the Pacific after his B-24 bomber crashed in 1943. He was eventually captured by Japanese when his raft reached land at the Marshall Islands and he spent the rest of the war in a prison camp where he received extra abuse from a sadistic guard.

Many people know his story from the movie Unbroken, but it didn’t include his struggles with alcohol, anger and depression after the war. In 1949, his wife convinced Louis to attend a Billy Graham Crusade in Los Angeles, where he finally heard the message and turned his life around. He had been having violent nightmares every night, but they ended immediately after hearing the gospel from Rev. Graham.

Below, a young Louis Zamperini with Billy Graham. 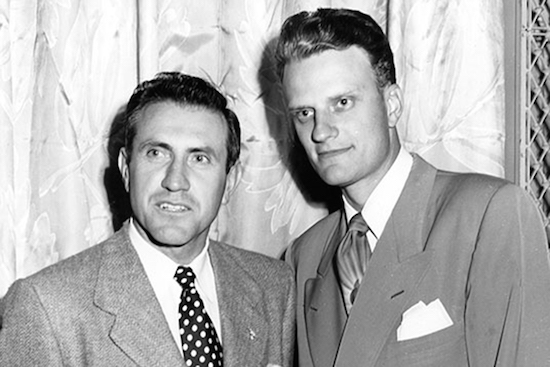 Billy Graham’s son Franklin appeared on Fox News in December 2014 when the movie Unbroken came out to discuss Zamperini’s remarkable recovery from PTSD after hearing Billy Graham’s message of the gospel.

Here’s a more general report about Zamperini’s life from CBS: