Justin Trudeau’s Culturally Appropriating Indian Fashion Choices Backfire: “We Indians Do Not Dress Like This Every Day Sir, Not Even In Bollywood”

Now this is hilarious. Virtue-signaling Canadian Prime Minister Justin Trudeau goes to India and goes out of his way to wear traditional Indian garb every day. And really over-the-top garb.

The plan backfired though as after a few days, it was being criticized by his Indian hosts.

Justin Trudeau has been ridiculed on social media by Indians for his 'tacky' and over the top outfit choices while on his first visit to their nation as Prime Minister. While many praised his clothing during the first two days of his trip, patience was wearing thin by the time he attended a Bollywood gala on Tuesday night, before the tide turned against him on Wednesday. Ministers, authors, journalists and ordinary Indians lined up to mock him on Wednesday, saying his wardrobe was 'fake and annoying'. Perhaps taking note of the criticism, the Canadian leader donned a suit on Thursday as he visited Jama Masjid, one of India's largest mosques.

Justin Trudeau is ridiculed by Indians for his 'fake, tacky and annoying' wardrobe of traditional outfits - and finally dons a suit after criticism by Chris Pleasance, Daily Mail, February 22, 2018

Check out the photos and tweets in the article, it’s hilarious.

Leading the criticism was Omar Abdullah, former chief minister of Jammu and Kashmir, who tweeted on Wednesday saying Trudeau's preening was 'all just a bit much.' 'We Indians do not dress like this every day sir, not even in Bollywood.' Bhaavna Arora, a bestselling Indian author, also chimed in, accusing Trudeau of wearing 'fancy dress' and saying she found it 'fake and annoying'. Shekhar Gupta, founder of Indian newspaper ThePrint also mocked the Canadian Prime Minister, accusing him of 'running a week-long “election campaign” in India in fancy dress.'

“We Indians do not dress like this everyday sir, not even in Bollywood.” That’s great.

Kabir Taneja, an associate fellow at think-tank ORF and based in South Delhi, also took issue with Trudeau wearing traditional Sikh dress at the airport. 'Bro Golden Temple is not at the airport,' he wrote. 'Have some chill.' While Indian newspapers had initially praised Trudeau's attempt to cross cultural boundaries with his outfits - describing the red kurta 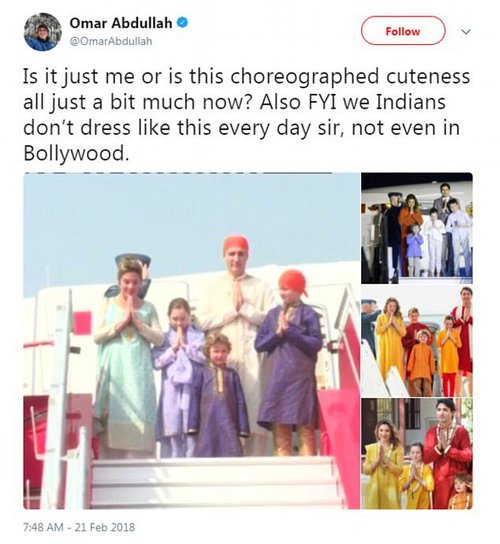 he wore on the first day of his visit as 'resplendent' and 'festive' - by Wednesday they lost patience as well. 'Too flashy even for an Indian', proclaimed Outlook India while The Print suggested that he looked like he was auditioning to be a model.

“Too flashy even for an Indian”. Looks like the PM really overdid it. Trudeau even tried to out-Bollywood Bollywood. Not a good strategy.

The tipping point seemed to have come the day before when Trudeau met the great and good of Bollywood, whose own looks arguably inspired some of his own. 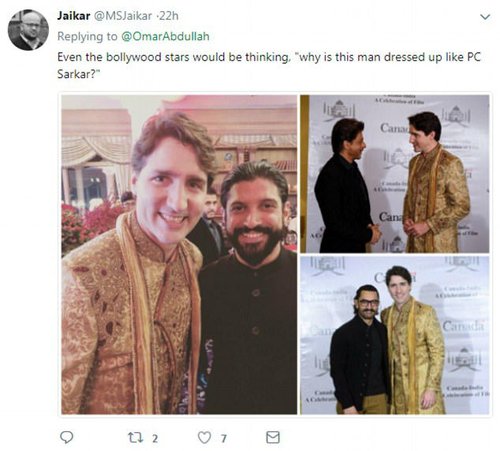 But while the actors dressed down for the occasion, opting largely for black suits and shirts, Trudeau went all-out with a gaudy golden number. India Today described the choice of clothing as 'tacky', suggesting it was insulting to his guests. The paper wrote: 'We understand that the Trudeaus do not understand Indian clothing as well as Indian dignitaries do, but for someone who's been fond of wearing Indian kurtas even back home, it's not wrong to expect a touch of class.'

Hey, shouldn’t a national leader be representing his own country and not that of his hosts? Or maybe Trudeau doesn’t think Canada has a culture of its own?

It is not only Trudeau's dress sense that has seen him come under fire on his India tour - he has also been snubbed by Indian politicians because of his past support for Sikh separatist groups. When he arrived in New Delhi on Saturday, instead of being greeted by Prime Minister Narendra Modi he was instead welcomed by a junior agriculture minister. While Modi's office insisted there was no subtext to the move, the leader is usually on hand to greet world leader with a hug at the airport. Trudeau's trip has also been criticised back home for his lack of official engagements - just one in eight days - making it more like a family holiday than a diplomatic visit.

Yes, a family holiday and photo op tour, supported by the Canadian taxpayer.