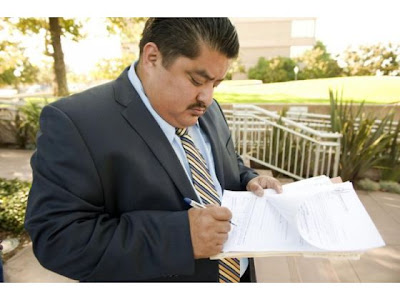 Jaime Segall-Gutierrez, an attorney representing both Victor Gonzalez and Jesus Reyna, signs his name on a claim for damages he will deliver to the city clerk's office at Anaheim City Hall during a press conference Friday morning. (Ken Steinhardt, The Orange County Register)

[Recent VDARE reports by this author on Disney/Anaheim, aka "Anacrime":

“Report from Occupied America: Thanks to Immigration (and the MSM), Not Walt Disney’s Anaheim”; and

The reconquista/racial socialist Orange County Register is promoting this thing to death. It supported the riots, and now it’s supporting the shakedown lawsuits.

Not only should these mopes’ frivolous lawsuit be summarily dismissed, but as numerous readers commented, they should be sued for casting taxpayers money and emotional distress. Beyond that, they should be arrested, and charged with interfering with a crime scene.

You may not “protest” at an active “crime” scene. (The scare quotes are because throwing bottles and rocks at police is not a “protest,” and it was not clear that a crime had been committed.) The rioters were trying to make it impossible for police crime scene investigators to do their jobs, which is really weird, considering their claim at the time that gangbanger Manuel “Stomper” Diaz had been murdered by the cops. If you wanted the policeman who shot and killed Diaz to be prosecuted and convicted, wouldn’t you want the CSIs to be able to do their job?

Then again, the rioters were gangbangers and their relatives and other supporters, so they were more interested in battering and intimidating the police than in “justice.”

ANAHEIM – Two men filed claims Friday against the city for injuries and emotional distress suffered while protesting the fatal shooting of Manuel Diaz by Anaheim police in July.

The claims for $1 million each were filed by Victor Gonzalez and Jesus Reyna, 22, both of Anaheim. A claim is typically the first step leading to a lawsuit against a city.

Diaz, 25, of Santa Ana was shot and killed by Anaheim police on July 21 in the 700 block of North Anna Drive. Police have said Diaz was a known gang member and was running from authorities before he was shot. Some witnesses on Anna Drive have told another story, saying that his shooting was unjustified.

[N.S.: "Witnesses." Yeah, gangbangers and their relatives and sympathizers.]

Following the shooting, residents of Anna Drive gathered at the scene and Anaheim officers fired bean bags and pepper spray into a crowd that according to police, began throwing bottles and rocks at officers. Also, a police dog accidentally escaped from an officer's vehicle and rushed into the crowd, biting demonstrators in an attack caught on video, police said.

In the claims, attorney James Segall-Gutierrez says Gonzalez and Reyna were protesting the shooting of their friend and neighbor when officers fired rubber bullets into the crowd. Gonzalez was struck and suffered "emotional distress." Reyna was shot by rubber bullets and suffered injuries to his right arm.

"They decided to file (claims) because they are sick and tired of the harassment and the brutality of police and they were injured," Segall-Gutierrez said following a news conference in front of City Hall.

Anaheim officials confirmed that the city attorney was reviewing the claims.

[Thanks to my reader-researcher RC for sending this article.]