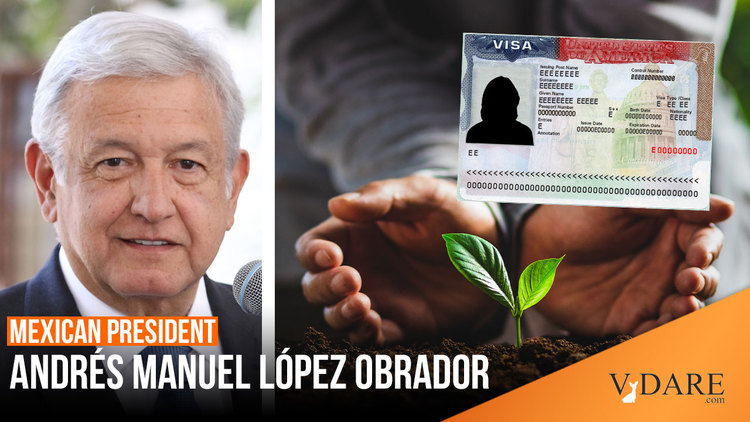 Mexican President AMLO (Andres Manuel Lopez Obrador), who worked so well with President Trump, is now following the cue of the Biden Administration.

It’s almost as though the leadership of a U.S. president can affect what the Mexican government does!

Now, in the midst of the Biden Border chaos, AMLO has come out with a new proposal for U.S. immigration policy, which he intends to discuss with President Biden in a teleconference scheduled for Thursday the 22nd of April.

And what, may you ask, is AMLO’s proposal?

The Mexican president presents this as a non-coercive measure to stop the mass rush to the border and the violence and unaccompanied children it involves.

Here’s how the Mexican president explained it in his morning press conference of April 19th:

Sembrando Vida is a Mexican government tree-planting program that hires over 400,000 tree planters to plant trees. Central America has the same climate and trees as the adjoining region of Mexico, so the same thing could be done there.

OK, but what does that have to do with U.S. immigration policy? Allow AMLO to explain it:

"Therefore, this proposal of expanding the program is accompanied with an offer. If a producer [meaning a tree-planter in the program] in Guatemala, El Salvador or Honduras, works his land, participates in the program, plants trees, and works for three years...after three years enrolled in the program he now has the right… to a temporary work visa to go to the United States for six months and then return home for six months. This is what many agricultural workers from Mexico do, they go north, work six months and return for sixth months to work their land back home."

So according to AMLO, working in a government program in Mexico or Central America gives them the right to get a work visa to work in the U.S. Make sense?

It gets even better.

"Well, after the work visa commitment, three years later, after having these temporary visas, they have the right, if they want it, to become U.S. citizens and to maintain dual nationality."

Yes that's really AMLO's proposal. And he seems very sincere about it!

But, how many Central Americans are going to take him up on it, when they can just go to the U.S. right now, as so many are doing?