A full plate of medical freebies from the unwilling American taxpayer is still not enough for greedy illegal aliens.

Below, Chicago aliens aggressively whined for free deluxe medical care with the help of their local Catholic church. 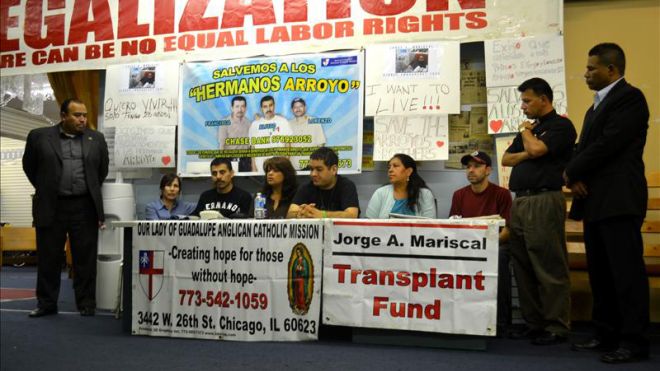 Moocher foreigners arrive illegally, work under the table or rip off a Social Security number to steal an American job, and then feel entitled to demand top-notch healthcare at no cost to them.

In Chicago, a gaggle of illegal alien demanders appealed to the silly media by hunger striking to spotlight their “plight” — and did so very effectively since the dinosaur press reported mainly on the sniffle factor, with very little about the taxpayer cost. No media account discussed the scarcity of available organs and the fact that an average of 18 people die every day from the lack of available organs.

Do Mexicans think the American doctors can just open up a fridge full of spare organs any time and pull them out as needed?

On Fox News (the alleged conservative network), the issue of organ transplants for illegals was debated with much hand-wringing and sensitive concern.

In my growing fantasy list of non-PC poll questions, I would like to know how many people would donate organs if they knew an illegal alien might get one.

The Chicago Tribune mentioned the annual costs after a liver transplant ($10k) but not the tab for the operation and hospital stay. Empathetic journalism disavows such tiresome facts that only vex busy readers.

Brothers Elfego and Lorenzo Arroyo each suffers from a deadly liver disease. But despite the urgency of their situation, the Chicago residents have struggled to receive organ transplants.

The Arroyo brothers are undocumented immigrants and lack insurance, friends and relatives say. Like others in their situation, they have been denied care that could increase their chances of survival due to their residency status.

“We know there are thousands of Latinos and (non-)Latinos with no documents who are facing the same situation,” Rev. Jose Landaverde said Monday during a news conference at Our Lady of Guadalupe Angelican Catholic Mission in Chicago’s Little Village neighborhood.

Both Elfego, 38, and Lorenzo, 36, attended the news conference and spoke little, but showed photographs of themselves in healthier times. They both have primary amyloidosis, a disease passed from parent to child, said Dr. David Ansell, senior vice president for clinical affairs and chief medical officer at Rush University Medical Center, who is familiar with the Arroyos and their health care dilemma. The disease makes the liver produce abnormal proteins that cause other organs to fail, he said.

“The only cure is a transplant,” Ansell said.

The Arroyos’ mother died a couple of years ago at age 63 of the same disease. Their older brother, Francisco Arroyo, 40, also had the disease, but because he is a legal resident, he received a liver transplant at Rush, Landaverde said.

The Arroyos’ position is not unique in America. About 5 percent to 10 percent of organs donated in the United States come from people who are uninsured, Ansell said. However, “close to zero percent” of the uninsured receive organ transplants.

In December, Landaverde met with Rush officials and discussed the difficulties undocumented immigrants face when trying to get transplants. Since then, Elfego Arroyo has been placed on a wait list for a liver transplant at Rush, where he had been receiving care, Landaverde said.

Lorenzo Arroyo is being treated at the University of Illinois Medical Center at Chicago, but that institution has not agreed to place him on a transplant list, Landaverde said.

When asked about Arroyo’s case, the University of Illinois Hospital and Health Science System issued a statement saying potential transplant patients, including undocumented immigrants, are assessed individually to determine if they meet medical and financial criteria.

If they have a living donor and the means to cover the transplant and follow-up care, they may be eligible for a transplant. The hospital can work to secure alternative funding for those who cannot afford a transplant or are not eligible for health entitlement funds, according to the statement.

Rush officials see caring for the undocumented and uninsurable as a moral issue, Ansell said. Rush plans to urge other institutions to also provide some transplants to the uninsurable on charitable grounds and has recently agreed to fund three transplants, Ansell said.

Once a person clears the transplant hurdle, their health care situation doesn’t always get easier. Post-transplant medications could run $10,000 a year for life, Ansell said.

Rush officials have not yet determined how the institution would help cover those costs.

Members of the Our Lady of Guadalupe community said they will continue to pressure the medical community and legislators for changes in hospital policy on the treatment of undocumented immigrants. Five people, including Lorenzo Arroyo, are currently on a hunger strike to draw attention to the issue.

“They are treating us like criminals,” said Hilda Burgos, 45, who described herself as a friend of the Arroyo family. “We came here looking for opportunities for our families. That is our only crime.”