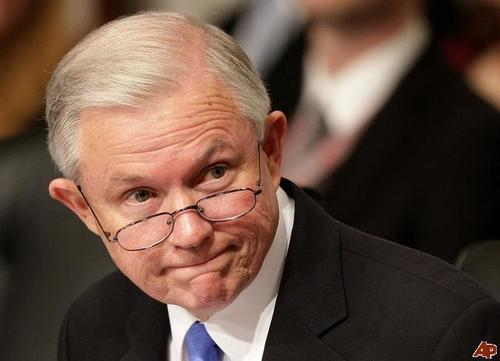 It’s nice to know that Senator Jeff Sessions (R-AL) keeps busy trying to save America from excessive immigration. He gives well researched speeches on the Senate floor (available on his YouTube channel) on the subject and also publishes edifying press releases and the occasional longer piece to inform the Republican conference and the public.

Senator Sessions’ most recent effort is a medium-length press release that criticizes the crazy-high number of green cards to be distributed willy-nilly in the upcoming decade — a shocking 10 million, at a time when jobs are not returning during the tepid recovery. And that’s without the hideous Gang of Eight bill the Senate passed that would have doubled legal immigration forever. 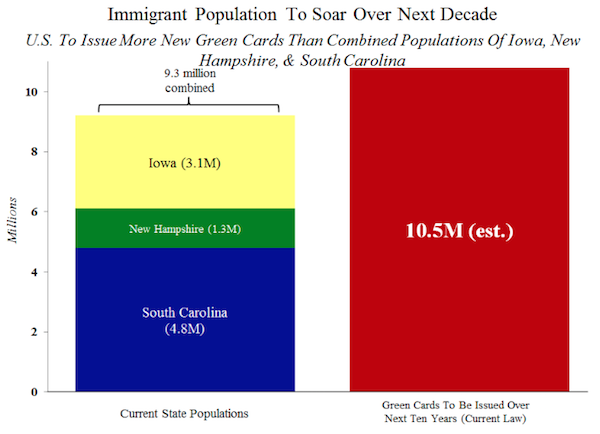 Unlike many snoozer press releases that flow from the capitol city, the Sessions piece is well written and includes history, polling and economic research which all indicate less immigration benefits the American worker and taxpayer. It even mentions that automation is reducing hiring which is a worsening drag on the jobs economy.

Washington needs to find the Off switch and stop excessive immigration now operating on automatic pilot. There are bad problems being created by increasing the angry jobless underclass. Adding millions of unskilled foreigners to the population who cannot find work could be laying the foundation for widespread civil unrest in the future

Background From Subcommittee On Immigration And The National Interest

The overwhelming majority of immigration to the United States is the result of our visa policies. Each year, millions of visas are issued to temporary workers, foreign students, refugees, asylees, and permanent immigrants for admission into the United States. The lion’s share of these visas are for lesser-skilled and lower-paid workers and their dependents who, because they are here on work-authorized visas, are added directly to the same labor pool occupied by current unemployed jobseekers.

Expressly because they are admitted into the U.S. on legal immigrant visas, most will be able to draw a wide range of taxpayer-funded benefits, and corporations will be allowed to directly substitute these workers for Americans. Improved border security would have no effect on the continued arrival of these new foreign workers, refugees, and permanent immigrants—because they are all invited here by the federal government.

The most significant of all immigration documents issued by the U.S. is, by far, the “green card.” When a foreign citizen is issued a green card it guarantees them the following benefits inside the United States: lifetime work authorization, access to federal welfare, access to Social Security and Medicare, the ability to obtain citizenship and voting privileges, and the immigration of their family members and elderly relatives.

These ongoing visa issuances are the result of federal law, and their number can be adjusted at any time with a new federal law. However, unlike other autopilot policies—such as tax rates or spending programs—there is virtually no national discussion or media coverage over how many visas we issue, to whom we issue them and on what basis, or how the issuance of these visas to individuals living in foreign countries impacts the interests of people already living in this country.

This has substantial economic implications.

These lower midcentury immigration levels were the product of a federal policy change: after the last period of large-scale immigration that had begun in roughly 1880, immigration rates were lowered to reduce admissions. The foreign-born share of the U.S. population fell for six consecutive decades, from 1910 through 1960.

Legislation enacted in 1965, among other factors, substantially increased low-skilled immigration. Since 1970, the foreign-born population in the United States has increased more than four-fold—to a record 42.1 million today. The foreign-born share of the population has risen from fewer than 1 in 21 in 1970, to presently approaching 1 in 7. As the supply of available labor has increased, so too has downward pressure on wages. Georgetown and Hebrew University economics professor Eric Gould has observed that “the last four decades have witnessed a dramatic change in the wage and employment structure in the United States… The overall evidence suggests that the manufacturing and immigration trends have hollowed-out the overall demand for middle-skilled workers in all sectors, while increasing the supply of workers in lower skilled jobs. Both phenomena are producing downward pressure on the relative wages of workers at the low end of the income distribution.”

During the low-immigration period from 1948-1973, real median compensation for U.S. workers increased more than 90 percent. By contrast, real average hourly wages were lower in 2014 than they were in 1973, four decades earlier. Harvard Economist George Borjas also documented the effects of high immigration rates on African-American workers, writing that “a 10% immigration-induced increase in the supply of workers in a particular skill group reduced the black wage of that group by 2.5%.” Past immigrants are additionally among those most economically impacted by the arrival of large numbers of new workers brought in to compete for the same jobs. In Los Angeles County, for example, 1 in 3 recent immigrants are living below the poverty line. And this federal policy of new large-scale admissions continues unaltered at a time when automation is reducing hiring, and when a record share of our own workers here in America are not employed.

President Coolidge articulated how a slowing of immigration would benefit both U.S.-born and immigrant-workers: “We want to keep wages and living conditions good for everyone who is now here or who may come here. As a nation, our first duty must be to those who are already our inhabitants, whether native or immigrants. To them we owe an especial and a weighty obligation.”

It is worth observing that the 10 million grants of new permanent residency under current law is not an estimate of total new immigration over the next decade. In fact, the increased distribution of legal immigrant visas tend to correlate with increased flows of immigration illegally: the former helps provide networks and pull factors for the latter. Most of the countries who send the largest numbers of citizens with green cards are also the countries who send the most citizens illegally. The Census Bureau estimates 13 million new immigrants will arrive, on net, between now and 2024—hurtling the U.S. past all recorded figures in terms of the foreign-born share of total population, quickly eclipsing the watermark recorded 105 years ago during the 1880–1920 immigration wave before immigration rates were lowered. Absent new legislation to lower green card allotments and the unprecedented level of future immigration, the Census Bureau projects immigration as a share of population will continue setting new records each year, for all time.

Polling from Gallup and Fox shows that Americans want lawmakers to reduce, not increase, immigration rates by a stark 2:1 margin. Reuters puts it at nearly a 3:1 margin. And polling from GOP pollster Kellyanne Conway shows that by the huge margin of nearly 10:1 people of all backgrounds are united in their belief that U.S. companies seeking workers should raise wages for those already living here—instead of bringing in new labor from abroad.