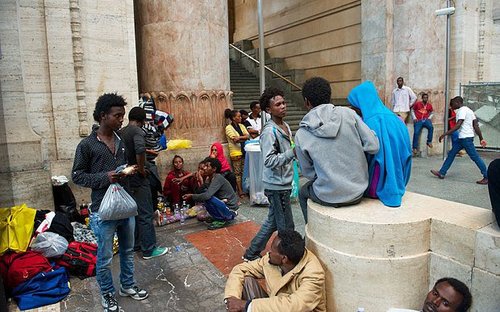 British newspaper commentary on the invading mobs at Calais has mostly been hopeless.  The Brits are completely sunk in ethnomasochism.

In an unassuming old shop on the corner of a street near the Scottish Home Office, the Unity centre has been fighting for several years to protect refugees and asylum seekers who have made their home in Glasgow.

Asylum seekers come in and report to Unity before signing in at the Home Office building nearby. If they are detained during their visit to the Home Office, activists can swing into action to try and get them released. It’s a system that has helped hundreds stay in Scotland since asylum seekers started arriving in Glasgow at the end of the 1990s.  [Give me your tired, your poor … the Europeans embracing migrants by Maryline Beaumard; Guardian, August 3rd 2015.  For those with strong stomachs the news story includes a video clip with a multicultural rendering of The Bonnie Banks o' Loch Lomond.]

There are still some glimmers of sense among the Brit commentariat, though.  In today's Daily Telegraph, Colin Freeman seems to have grasped a key point.

Nor will any sense of how lucky their are to get into Europe necessarily be passed on to their offspring, as I saw while covering riots on run-down migrant-dominated housing estates in Sweden two years ago. Sweden is one of the few European countries that still gives asylum seekers refuge in large numbers, which made the riots all the more baffling to the average liberal-minded Swede.

An explanation was provided by a young Iraqi called Rami al-Khamisi, whose family had fled Saddam Hussein's Iraq, travelling first overland and then across the Baltic in a people-smuggling boat. An old man who died on board was cast into the sea because his corpse smelt too much. But that, Rami said, was his only real recollection of the grim life his parents were fleeing.. "They (our parents) compare it to Baghdad or Somalia," he said. "But we younger immigrants only really know Sweden, and we just compare our situation to the one around us."

By that criteria, though, Britain should not perhaps be surprised if new generations of migrants do not remain perennially grateful, or even embrace causes like radical Islam, which allows followers in the West to blame their problems on the secular society around them. Among the youngsters now waiting in the lobby at Milan Central and the camps at Calais, there may well be many promising scholarship boys and head girls in the making. The question, perhaps, is how many drop-outs there will be too.  [The young migrants at Calais are the lucky ones – the question is whether they'll remember that , by Colin Freeman, Daily Telegraph, August 4th 2015.]

I am sorry that neither Freeman nor his Daily Telegraph editors belong to that dwindling band of English-speakers who know that "criteria" is a plural noun, but I'm glad to see absimilation — even if only the concept, not the word — get an airing.

Of my many attempts to coin a word or phrase, one that never did get airborne, though I really think it should have, was "absimilation."

From We Are Doomed, Chapter 10:

The English word "assimilation" derives from the Latin prefix ad-, which indicates a moving towards something, and the same language's verb simulare, "to cause a person or thing to resemble another."  You can make a precisely opposite word using the prefix ab-, which marks a moving away from something.  Many immigrants of course assimilate to American society.  I think I have.  I hope I have; I've tried to.  Many others, however, especially in the second and following generations, absimilate.

One sad story of absimilation is told in the 2008 book Generations of Exclusion: Mexican Americans, Assimilation, and Race — remarkably, as the authors, Vilma Ortiz and Edward E. Telles, are left-wing Hispanic sociologists (at UCLA).  Sample quote:  "Despite sixty years of political and legal battles to improve the education of Mexican Americans, they continue to have the lowest average education levels and the highest high school dropout rates among major ethnic and racial groups in the United States."  Ortiz and Telles blame the schools.  Gosh, when are we ever going to get those schools right?  More money!  More money! ...

How do left-wing Hispanic sociologists get away with writing so frankly about multigenerational failure?  How do you think?  They blame it on "racism."

Absimilation seems to be rather common, though you don't read much about it.  I noticed it years ago in England.  The first generation of black Caribbean immigrants to my native land strove to be as English as possible.  They worked hard at low-paying jobs — the black bus conductor was a stock figure in English life by the mid-1960s — bought old houses and spruced them up, dressed in immaculate "Sunday best" to go to church, and kept on the right side of the law.  Doing unskilled summer-vacation construction jobs at the time, I was often in work gangs with black laborers.  They were popular and good workers, fun to be around.  Those island accents apart, they were as English as they could be.  I still get fond nostalgic feelings when I hear a voice with that Caribbean lilt.

It was dismaying, in the seventies and eighties, to see a large piece of the second-generation cohort break off and slip into crime, idleness, and social dysfunction.  Those spruced-up houses became ganja dens; daughters of the elegant church ladies became welfare queens.  A stock joke among Londoners in the 1980s was:  "Q. How do you reduce street crime in London?   A. Close down the Northern Line."   That is the subway line that goes to Brixton, a district of concentrated black settlement.

It's the same with Muslim immigrants.  Of the four men held responsible for the London terror bombings of July 2005, three were English-born.  (The fourth immigrated at age five from Jamaica.)  In December 2008, writing in PajamasMedia.com, terrorism expert Patrick Poole noted that many U.S. citizens of Somali origin were leaving the country to train as terrorists in Somalia ...

Assimilation, absimilation:  If you let great numbers of foreigners settle in your country, you will surely get both.

First-generation immigrants from anywhere will mostly — though not, of course, exclusively — express gratitude.  With subsequent generations, especially those from low-human-capital groups, resentment is more characteristic.