On Monday, Senator Sessions posted a press release expressing his disapproval of Sarah Saldana to be the new head of ICE. He used the occasion to lay out more arguments against the President’s unlawful executive amnesty.

Incidentally, radio person Laura Ingraham noted this morning that the establishment GOP may try to steal the Senate Budget Committee Chairmanship from Sessions. Mike Enzi (@SenatorEnzi) is officially senior to Sessions and therefore can be named Chair even though Sessions has absolutely earned the position. (Listen to the audio.)

LAURA INGRAHAM: I have a housekeeping note here that we all have to keep to the forefront of our minds as we close out our political season this year. The establishment and other crony friends are trying to force Jeff Sessions out as chairman of the Senate Budget Committee, an extremely important position. They’re trying to replace him with Senator Mike Ezni. Remember, Liz Cheney tried to replace him and that didn’t work out. So Enzi voted for the CR/omnibus. Sessions said, ‘No way. Of course I can’t vote for the CR/omnibus.’ Sessions is the man. Support Jeff Sessions. And all you Republicans trying to force him out – we’re keeping a list.

In Sessions’ press release, he mentioned the December 10 Senate testimony of Temple law professor Jan Ting who believes that immigration boils down to the numbers:

Although it’s become a cliché to say that everyone agrees that our immigration system is broken, I don’t agree with that. I believe that what’s broken is our willingness to make the hard choice between simply allowing unlimited immigration, as we did for the first century of the republic, or alternatively enforcing a numerical limit on immigration, with all the attendant difficulty, complexity and expense that entails. 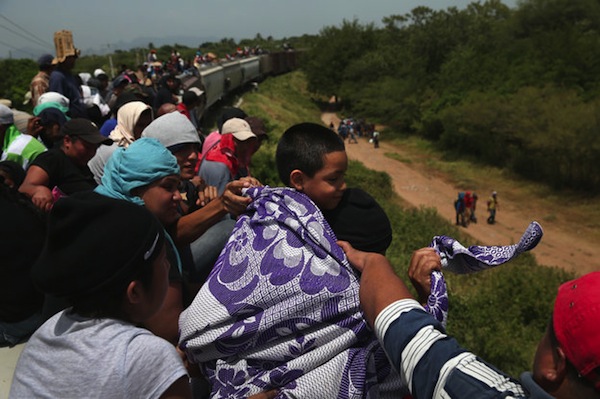 Here’s the press release. It reads like it was meant to be a floor speech, but there’s no video on the Sessions Youtube page, at least yet. Surprisingly, the Senate is in session today, Tuesday. Harry Reid must have more terrible nominations to shove through during the abhorrent lame duck session.

WASHINGTON—U.S. Senator Jeff Sessions (R-AL), a senior member of the Senate Judiciary Committee, submitted the following remarks for the Congressional record on the nomination of Sarah Saldana as Assistant Secretary for Immigration and Customs Enforcement (ICE):

“Mr. President, I rise to speak in opposition to the nomination of Sarah Saldana. Ms. Saldaña has been nominated to head the nation’s top immigration law enforcement agency, which has been at the epicenter of this administration’s refusal to enforce our nation’s immigration laws.

When asked whether she rejects the President’s unlawful action to unilaterally grant legal residence and work permits to 5 million individuals illegally in the country, Ms. Saldaña, currently the United States Attorney for the Northern District of Texas, responded ‘no.’ Her answer reflects a remarkable disregard for the rule of law that demonstrates that, if confirmed, she will continue the pattern of lawlessness perpetuated by the President and the political leadership of the Department of Homeland Security.

‘The most comprehensive analysis of the administration’s deferred-action policies that has been produced to date is a 77-page law journal article published last year by Berkeley law professor John Yoo and St. Thomas law professor Robert Delahunty. In that article the professors catalogued and reviewed ‘the most commonly offered and generally accepted excuses or justifications for the breach of [the president's] duty to execute the laws’ and concluded that the DACA program ‘does not fall within any of them.’

The conclusions of Professors Yoo and Delahunty have been repeatedly endorsed during the past three years by a well-regarded former professor of constitutional law at the University of Chicago Law School, Barack H. Obama II.’

Indeed, President Obama himself has said over 20 times that he does not have the authority to do what he has done.

‘With respect to the notion that I can just suspend deportations through executive order, that’s just not the case, because there are laws on the books that Congress has passed… [W]e’ve got three branches of government. Congress passes the law. The executive branch’s job is to enforce and implement those laws… There are enough laws on the books by Congress that are very clear in terms of how we have to enforce our immigration system that for me to simply, through executive order, ignore those congressional mandates would not conform with my appropriate roles as President.’

On September 17, 2013, the President said regarding his unlawful Deferred Action for Childhood Arrivals (DACA) program:

‘If we start broadening that… I would be ignoring the law in a way that I think would be very difficult to defend legally. So that’s not an option… What I’ve said is there is a path to get this done, and that’s through Congress.’

On March 6, 2014, the President stated that the DACA program:

‘Already stretched my administrative capacity very far… But at a certain point the reason that these deportations are taking place is, Congress said, ‘you have to enforce these laws.’ They fund the hiring of officials at the department that’s charged with enforcing. And I cannot ignore those laws any more than I could ignore, you know, any of the other laws that are on the books.’

Article I, section 8 of the Constitution is clear that Congress is vested with plenary power over naturalization law. In the 1954 case Galvan v. Press, the Supreme Court stated: ‘That the formulation of these policies is entrusted exclusively to Congress has become about as firmly embedded in the legislative and judicial tissue of our body politic as any aspect of our government.’

In exercising its plenary authority, Congress has declined to pass an immigration bill bestowing legal status and work authorization upon illegal immigrants. Congress has recognized the need to control the number of individuals who can come to this country to live and to work. It has passed laws to establish rules to protect the interests of U.S. citizens.

President Obama’s recent unlawful actions have essentially established another immigration system wholly apart from that which has been established through constitutionally enacted laws.

In a recent paper, Professor Jan Ting noted (and testified similarly before the Judiciary Committee):

Ting concludes: ‘In other words, the president’s deferred-action program sits on a plainly unconstitutional stool, which itself rests upon three plainly illegal legs.

‘The President has not just declined to prosecute (or deport) those who have violated our nation’s immigration laws. He has given to millions of illegal aliens a ‘lawful’ permission to remain in the United States as well, and with that the ability to obtain work authorization, driver’s licenses, and countless other benefits that are specifically barred to illegal immigrants by U.S. law. In other words, he has taken it upon himself to drastically re-write our immigration policy, the terms of which, by constitutional design, are expressly set by the Congress.’

George Washington Law Professor Jonathan Turley, a nationally recognized constitutional scholar, who is a self-described supporter of the President and his policies, testified before the House Judiciary Committee regarding the President’s unilateral action on immigration:

‘Many of these questions are not close, in my view. The president is outside the line… And that’s where we have the most serious constitutional crisis, I view, in my lifetime, and that is, [Congress] is becoming less and less relevant.’

The problem of what the president is doing is that he is not simply posing a danger to the constitutional system; he is becoming the very danger the Constitution was designed to avoid: that is, the concentration of power in any single branch.’

According to ICE agents and officers, they are already being ordered to implement the President’s unlawful directives.

One ICE supervisor said: ‘If you sneak in through the border, get past the Border Patrol, stay under the radar for a few years, have kids, you will be rewarded with protection from deportation… This is not merely [prosecutorial discretion], this is a flagrant disregard for the rule of law and our sovereignty as a nation. Even if you come to the [port of entry] and claim credible fear, you will eventually be released from custody because you are not a priority.’

According to the Partnership for Public Service’s ‘Best Places to Work in the Federal Government’ rankings released on December 9, 2014, the Department of Homeland Security is the lowest of all of the major federal agencies. Of all federal agency subcomponents, ICE is ranked dead last by its employees.

In June 2010, the National ICE Council, the union that represents more than 7,000 agents within ICE, cast a unanimous vote of ‘No Confidence’ in former ICE Director John Morton. That vote stemmed from the fact that the agents were prevented by senior leadership from carrying out their lawful duty to enforce immigration laws. Several ICE agents later sued Secretary Napolitano, Director Morton, and former U.S. Citizenship and Immigration Services Director Mayorkas, arguing that the administration’s amnesty policies caused the ICE agents to violate their oath of office and federal law by commanding them to refrain from detaining certain illegal aliens. The court held that ‘DHS does not have discretion to refuse to initiate removal proceedings [where the law requires it to do so].’ The court also re-affirmed that Congress, and not the President, has the plenary power to set immigration law and that the administration’s prosecutorial discretion and DACA policies violate federal law.

Congress cannot further capitulate to this President’s overreach. I would ask my colleagues to heed Professor Jonathan Turley’s warning:

‘I believe that [Congress] is facing a critical crossroads in terms of its continued relevance in this process. What this body cannot become is a debating society where it can issue rules and laws that are either complied with or not complied with by the president. I think that’s where we are… [A] president cannot ignore an express statement on policy grounds… [I]n terms of the institutional issue… look around you. Is this truly the body that existed when it was formed? Does it have the same gravitational pull and authority that was given to it by its framers? You’re the keepers of this authority. You took an oath to uphold it. And the framers assumed that you would have the institutional wherewithal and, frankly, ambition to defend the turf that is the legislative branch.’

The first priority of Congress must be to restore the rule of law, secure the border, and bring the administration into compliance with the laws of the United States. Congress cannot and must not confirm anyone to lead an agency in DHS or other law enforcement agency who supports executive amnesty. Congress cannot vote to accelerate its own demise. It would be unthinkable to yield to the confirmation of such nominees in the face of so grave a threat to our Constitutional order.

For that reason, I will oppose the nomination and I urge my colleagues to do the same.”