Two articles that were top center on NYTimes.com:

By JULIE BOSMAN and TIMOTHY WILLIAMS

The department said Tuesday that it had decided not to release the name of the officer involved in the St.Louis-area shooting death of Michael Brown out of concern for his safety.

As you may recall, a few years ago I played a miniscule role in encouraging the mother of an 18-year-old violist who had been shot and killed by a federal Drug Enforcement Agency agent to sue. A judge eventually awarded the parents $3 million. In that case, the government kept the shooter’s name secret for many months and perhaps a year, ostensibly to discourage revenge attacks (presumably by the surviving members of the string section in the victim’s high school orchestra).

That act of government secrecy was not treated as national news. In fact, the entire shooting was not national news. It was barely local news in the weeks after it happened.

The shooting has spurred a social media campaign over negative depictions of young black men in the news media.

When Tyler Atkins heard about the shooting of Michael Brown, 18, an unarmed black teenager in Ferguson, Mo., he posted on Twitter a picture of himself in a tuxedo, with a saxophone around his neck, next to a photograph of himself dressed in a black T-shirt with a blue bandanna tied around his head and his finger pointed at the camera.

Like hundreds of young African-Americans, he placed his pictures under the hashtag #IfTheyGunnedMeDown, protesting Mr. Brown’s killing by a police officer and the way young black men are depicted in the news media. He said Mr. Brown’s identity was distorted and filtered through negative stereotypes, and that the same would have been done to him with the bandanna image if he found himself the victim of a similar tragedy. The first picture was taken after a jazz concert at the High School for the Performing and Visual Arts in Houston, Tex., where Mr. Atkins, a senior, studies music. The other was taken during a recording for a rap video he made with friends for a school math project.

“Had the media gained a hold of this picture, I feel I it would be used to portray that I was in a gang, which is not true at all,” Mr. Atkins, 17, wrote in an email.

The speed with which the shooting of Mr. Brown has resonated on social media has helped propel and transform a local shooting into a national cause, as African-American commenters draw attention to continued incidents of blacks being shot by police and the media portrayals of young black men. 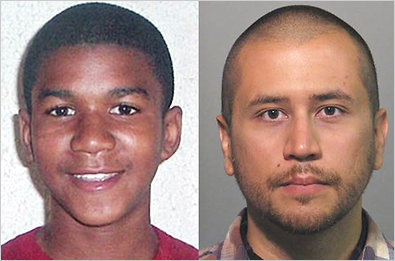 For anybody who wishes to be accepted as a respectable participant in the Public Square, there are numerous Bizarro Universe conventions that must be observed:

I could go on for some time in this vein.

I doubt if all these rules have all that much to do with blacks per se. Instead, they are more like hazing rituals that white people in positions of influence and power impose on other white people aspiring to places in the power structure. They’re a little like fraternity initiations rituals requiring pledges to run across campus covered in nothing but Crisco. Do you want to join the club enough to humiliate yourself?