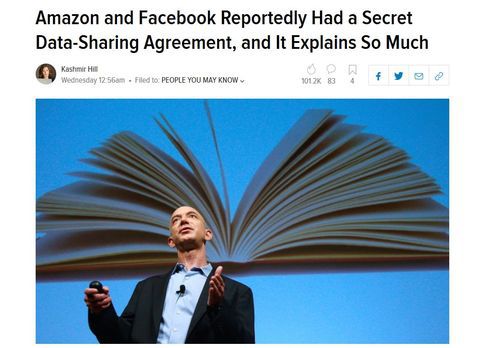 Wayne Allensworth writes below about a review by fellow Chronicles writer James Jatras that was "moderated" (i.e. disappeared)  by Amazon, probably for Badthink. Here's note via Kate Macmilan at Canadian blog SmallDeadAnimals, who headlines it Break  Them Up (Into a hundred thousand million pieces.)

Back in 2015, a woman named Imy Santiago wrote an Amazon review of a novel that she had read and liked. Amazon immediately took the review down and told Santiago she had “violated its policies.” Santiago re-read her review, didn’t see anything objectionable about it, so she tried to post it again. “You’re not eligible to review this product,” an Amazon prompt informed her.

When she wrote to Amazon about it, the company told her that her “account activity indicates you know the author personally.” Santiago did not know the author, so she wrote an angry email to Amazon and blogged about Amazon’s “big brother” surveillance.

I reached out to both Santiago and Amazon at the time to try to figure out what the hell happened here. Santiago, who is an indie book writer herself, told me that she’d been in the same ballroom with the author in New York a few months before at a book signing event, but had not talked to her, and that she had followed the author on Twitter and Facebook after reading her books. Santiago had never connected her Facebook account to Amazon, she said.

Amazon and Facebook Reportedly Had a Secret Data-Sharing Agreement, and It Explains So Much

But she didn't have to connect her Facebook account to Amazon, the two companies were talking behind her back.

A new report in the New York Times about Facebook’s surprising level of data-sharing with other technology companies may shed light on those mechanisms:

The social network permitted Amazon to obtain users’ names and contact information through their friends, and it let Yahoo view streams of friends’ posts as recently as this summer, despite public statements that it had stopped that type of sharing years earlier.

If Amazon was sucking up data from Facebook about who knew whom, it may explain why Santiago’s review was blocked. Because Santiago had followed the author on Facebook, Amazon or its algorithms would see her name and contact information as being connected to the author there, according to the Times. Facebook reportedly didn’t let users know this data-sharing was happening nor get their consent, so Santiago, as well as the author presumably, wouldn’t have known this had happened.

And while you're thinking about that check out the Z-Man's latest podcast which has a segment on Conservatism Inc. publications taking donor money to oppose breaking up Big Tech.