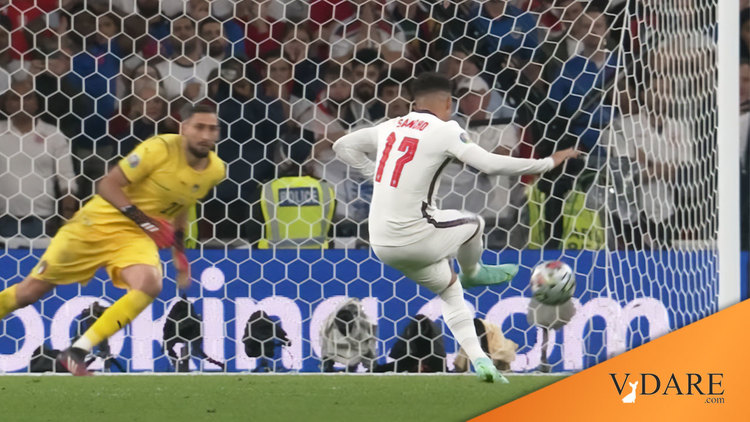 We’re disgusted that some of our squad – who have given everything for the shirt this summer – have been subjected to discriminatory abuse online after tonight’s game.

We stand with our players ❤️ https://t.co/1Ce48XRHEl

In this universe: “England Needs More Diversity and Immigration to Crush Racism Revealed in Loss to Italy."

Apparently, in the big European soccer championship game today, the score was tied 1-1 so each team picked 5 players to take penalty kicks from 12 meters against the goalie. The Italian coach picked five white guys and they made 3 out of 5. The English coach first sent out two white guys who both scored.

Then he took out two whites and sent in blacks cold off the bench. They both failed.

Then he had a teenage black try to tie the game up with England’s final kick and he failed too.

Obviously, a small sample size, but if the English coach’s strategy succeeded it would have been trumpeted as proof of the racial superiority of blacks and the need for England to import lots more blacks.

Because it failed and many English fans noticed it failed, it’s being megaphoned as proof that England needs even more black immigration to overwhelm those evil white racists who noticed.