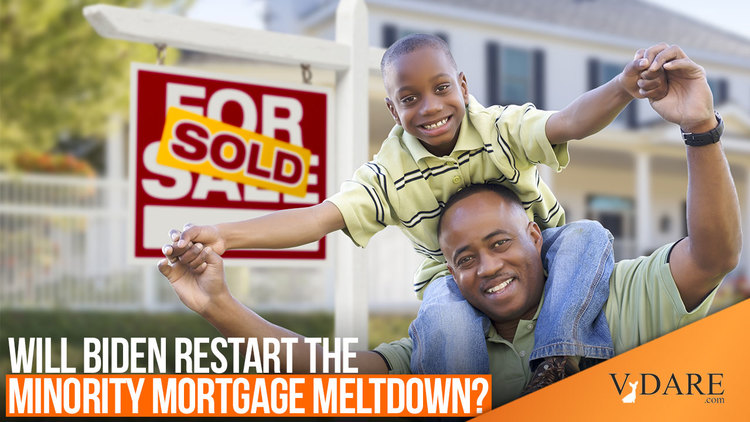 Biden And "Low-Income" Housing Borrowers: What Could Possibly Go Wrong?

A long-awaited Supreme Court decision last month gave President Joe Biden the ability to remove the Trump-era leader of the Federal Housing Finance Agency, and he wasted no time.

WASHINGTON — President Joe Biden’s move to fire the top U.S. mortgage regulator is triggering calls from fellow Democrats to use the agency to expand access to loans for lower-income people, who have struggled to buy homes since the financial crisis.

… The president installed as interim director an agency veteran who says she’ll make affordable housing and combating discrimination a top priority, but who has underwhelmed those on the left, who say she is a mere caretaker.

Progressives are concerned that Biden will be too timid in changing course at the powerful agency overseeing Fannie Mae and Freddie Mac, the two companies that stand behind half of the $11 trillion U.S. mortgage market….

The pressure from the left poses a tough choice for Biden. Democrats for years have pushed the agency responsible for Fannie and Freddie to expand homeownership and narrow the racial wealth gap. But making mortgages cheaper and more accessible could also raise the risks of defaults and increase the odds that the companies would need another bailout in the future. Fannie and Freddie were seized by the government in 2008 to avert their failure during the subprime mortgage crash. …

While Biden has proposed a raft of home-affordability measures, having control of Fannie and Freddie might be his most effective tool.

The FHFA director “is the most powerful and consequential job on housing in America,” said David Dworkin, president and CEO of the National Housing Conference. “There is no close second.”

Dworkin and other housing advocates want FHFA to allow Fannie and Freddie to take on more financial risk — meaning more government intervention backed by taxpayers — in the name of expanding access to mortgages.

Among their ideas: Giving Fannie and Freddie free rein to purchase mortgages with lower credit scores, allowing private lenders to make more of those loans; cutting fees; and expanding investment that supports the construction of multifamily rental properties.

Advocates want FHFA to immediately do away with Trump-era limits on Fannie and Freddie’s purchases of “high-risk” loans — characterized as having some combination of low credit scores and high debt-to-income or loan-to-value ratios.

Allowing the companies to purchase and guarantee more of the loans could lead to lenders issuing more of them, which would extend credit to more low-credit-score, low-income borrowers without requiring higher down payments to compensate for the risk. Fannie and Freddie would pick up the tab if the loan defaulted.

… On her first day at the helm of FHFA, Thompson said she was committed to ensuring that the housing finance system operated “in a safe and sound manner” while keeping a “laser focus” on community investment. She said there was a “widespread lack of affordable housing and access to credit, especially in communities of color.”

Erika Poethig, special assistant to the president for housing and urban policy, said the administration is “committed to expanding access to affordable homeownership, especially for low-wealth borrowers and communities of color that face challenges in the housing market.”

“In the coming months and years ahead, we look forward to working with FHFA leadership to use the levers of housing finance to address the racial wealth gap, expand housing supply and ensure housing affordability,” she added. …

The equity agenda will inevitably focus on your home equity because, as Willie Sutton might say, that’s where the money is.