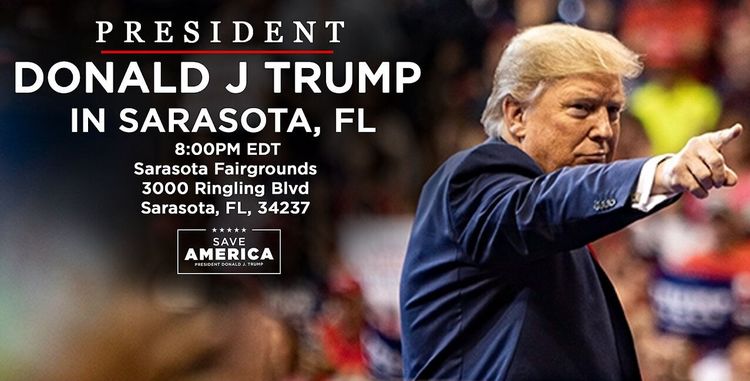 Trump On Immigration In Sarasota: "Under My Administration, We Stood Up To The Open Borders Lobby "

This is a partial transcript (emphases added) of what Trump said at his Sarasota rally on July 2, viewable on Rumble.com, although the former President is banned from YouTube.

He's hitting the Biden Rush, deportations, MS-13 and so on, with few references to the problems of legal immigration, but he's right to say that the Biden Rush, and Biden's deliberate tearing down of all the immigration laws, as well as his freezing of wall construction are "a crime against this nation".

Three days ago, I traveled to the Southern Border to witness Joe Biden's demolition of American sovereignty firsthand. You saw that what a demolition it was. The Biden administration's willful and deliberate obliteration of America's borders and immigration laws is a crime against this nation. We will not stop and we will not rest until illegal policies are overturned and there's so many of them. They work so quickly.

Under my administration, we stood up to the Open Borders Lobby and it is a big and powerful lobby and nobody knows why—how the hell is It good for our country, people coming in? They're releasing them from prisons. Their criminals, the highest level murderers, drug dealers. We took on the corrupt special interests. We fought the radical globalists Left and we won, won, won—we won so much. And then we had a rigged election. Unfortunately.

When I left office, we had the most secure border in US history. We ended Catch and Release. We ended asylum fraud. We stopped the migrant caravans, you know, the caravans is coming back. They're coming back like never before we deported criminal aliens by the tens of thousands. We achieved a 95% reduction in illegal border crossings, and we built nearly 500 miles of border wall—really big, powerful, strong border wall.

It would have been nice if they finished the border wall and they got to paint the border wall to. we needed another couple of months it would have been completed took us two and a half years of litigation. We were sued by the Democrats. We were sued by Schumer, Pelosi the Democrats, two and a half years we won eleven lawsuits and we started almost 500 miles—incredible but they got to finish it up. Just finish it up—little sections left. already bought already paid for the steel and concrete is sitting right there. Just put it up and get it done—but now Joe Biden has intentionally dismantled the border and allowed the cartels, coyotes, child smugglers, woman smugglers, the biggest smugglers—they're the women smugglers, drug dealers, murderers and savage MS 13 gang members to infiltrate our country like never before.

Remain in Mexico. How good was that? You can't come in—you have to be in Mexico. They were taking everybody—he ripped up our safe third country agreements with Central America and You know, we had agreements with other countries, they didn't want to take back prisoners. They didn't want to take back MS-13 criminals—the worst guys and murderers. And I said, Well, why are they taking him back? They didn't do it during Obama, you couldn't get them out of our country.

They put airplanes all along the runway, so our planes couldn't land that have to come back into the United States, loaded up with MS-13. gang members. And you've heard me say this. I said to our people, really? That's terrible. How much do we pay them? “Sir—we pay them $500 million a year.” I said, That's okay, stop payment. And I stopped payment. I stopped payment. And the next day, I got a call from head of Honduras, Guatemala, El Salvador. And they said, “Sir, you stop payment on the money that the United States was [in brackets stupidly] sending us you stopped payments, why is it?”

Because you're not taking back people that should be in your country, you're forcing them into ours, and you're not letting us bring them back? And we're not going to pay you ever again. We're not giving you anything. They said, “Sir, there must be a misunderstanding. We would love to have MS-13. back, please, please.”  And so the following day, they all went back, and we sent them back by the thousands. And they reverse that and they reversed our asylum reforms. And they halted the border wall and they shut down ICE, the brave great patriots of ICE and instituted catch and release nationwide. And you know what that is you catch someone, a criminal, a murderer, you take the name, they don't have much of an address, and you release them into our country. Congratulations. You've got a nice murderer now. And you have them by the thousands. In just five months, the Biden administration has created a crisis of unthinkable proportions. Illegal immigration is up nearly 1,000% from when I was President. And at this time in 2020. Think of it. There has never been anything like the border that we created and people could come into our country, but they had to come into our country, legally.

Arrivals of migrants, alien youth are up nearly 500%. And they're being resettled in cities and towns all across the United States at taxpayer expense. And you know, they have suicide watch for so many of these young children—they’re on suicide watch, because the way they're being treated and the way they were treated. You've seen them, they get them dropped off the wall, they drop them from a 30 foot wall. But there are many of them on suicide watch. But that's not all.

And now they're opening it up. Again, they're bringing people in by the hundreds of thousands—by the millions, by the way, you know, when they report they’re up, almost 1,000%. They don't, they don't know. Because for everyone you catch they say five times they say multiply times five, I say multiply it times more than 10 times—more than 10 times in destroying our country.

We are witnessing an illegal mass migration that is planned, facilitated, funded, aided and abetted by the far left Democrats, who thanks to a totally rigged and dishonest election, now control the United States government—think of that—think of that.