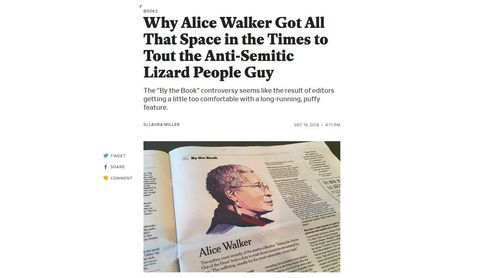 Alice Walker Explains How David Icke Is Like Malcolm X

In my latest Taki’s Magazine column, I point out that while the Theory of Intersectionality is fuzzy on a lot of details, it was made up to give black women more Diversity Pokemon Points than black men or white women.

So we get lectured a lot these days by black women. But one thing you can say about them is that they aren’t that science-minded, which is helping push the zeitgeist in anti-science directions.

Commentary: Human Race Get Off Your Knees: I couldn’t have put it better myself

I have been dragging along David Icke’s monumental book: Human Race Get Off Your Knees for the last month. … It is a massive book, and requires complete attention. Even so, some of it is hard to grasp. I have felt sorely regretful that my science foundation is so…nil. *

Earlier I wrote that David Icke reminded me of Malcolm X. I was thinking especially of Malcolm’s fearlessness. A fearlessness that made him seem cold, actually, though we know he wasn’t really. All that love of us that kept driving him to improve our lot; often into quite the wrong direction, but I need not go into that. What I was remembering was how he called our oppressors “blue eyed devils.” Now who could that have been? Well, we see them here in David Icke’s book as the descendants of the reptilian race that landed on our sweet planet the moment they could get a glimpse of it through the mist that used to cover it (before there was a moon). No kidding. Deep breath! Yes, before there was a moon! (Oh, I love the moon; can I keep it? Please?). Anyway, there they came, these space beings (we’re space beings too, of course, not to forget that). But they looked…. different than us. And they were.

They wanted gold and they wanted slaves to mine it for them. Now gosh, who does this remind us of? I only am asking. You do the work. Apparently their own planet needed this metal to continue its, apparently, long life. Credo Mutwa, Zulu shaman – and I am on my knees here in gratitude that he held on long enough to tell us about this – calls them the Chitauri, which has become my favorite word of all time (well, of this time that I’m learning all this): my partner and I go around saying Oh, Chitauri, whenever we get a glimpse of one or two of the Chitauri offspring, aka Illuminati bloodline families and their puppets, on the telly. …

It’s an amazing book, HUMAN RACE GET OFF YOUR KNEES, and reading it was the ultimate reading adventure. I felt it was the first time I was able to observe, and mostly imagine and comprehend, the root of the incredible evil that has engulfed our planet. A lot of it is how shall we say: shocking, beyond belief (but not really, if you don’t get too scared), stunning, profound. The deconstruction of language is breathtaking, the interrogation of symbols startling.

Nobody loves the word “interrogation” more than a deconstructionist.

The Reptilian space beings whose hybrid (part human, part reptile) descendants make our lives hell in Paradise were blue eyed devils to Malcolm X, the devil himself to my Christian parents, who never talked about eye color,

I’ve noticed that recently the New York Times has been running stories about how genetic testing oppresses black women. Genetics used to be taught mostly in regard to blue eyes and dominant and recessive genes (Punnett square). For example, inheriting wizardry in Harry Potter works exactly like inheriting blue eyes. I think some black women tend to conceive of genetics as a conspiracy to give certain dominant women blue eyes. Blue eyes tend to be a big deal to black lady writers. See, for example, Nobel laureate Toni Morrison’s first novel The Bluest Eye:

Pecola is continually reminded of what an “ugly” girl she is by members of her neighborhood and school community. In an attempt to beautify herself, Pecola wishes for blue eyes – a standard that was perpetuated through the gifting of white, blue-eyed dolls throughout her childhood. … Her insanity at the end of the novel is her only way to escape the world where she cannot be beautiful and to get the blue eyes she desires from the beginning of the novel.