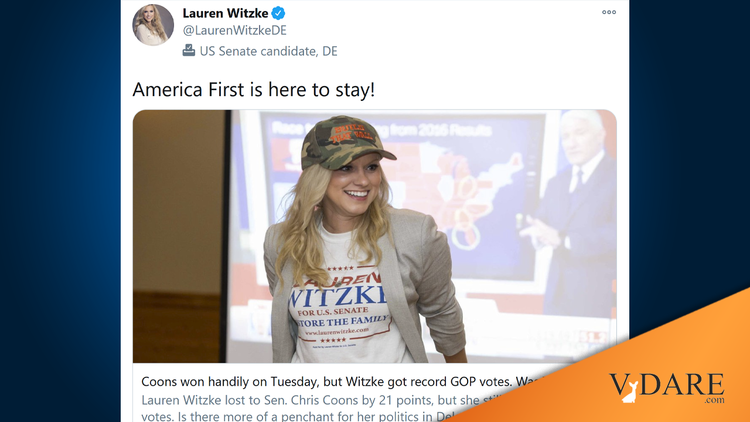 Immigration patriot Lauren Witzke succeeded, in spite of opposition from the GOP establishment,  in getting the Republican nomination for Senator in the state of Delaware, formerly represented by Democratic presidential candidate Joe Biden, but failed to defeat Democrat Chris Coons.

This is normal, Delaware frequently sends a Democrat to the Senate, but it's a worthwhile protest candidacy and it was successful in one way—she did better than previous Republican challengers:

Witzke eclipsed 2010 O'Donnell campaign
Prior to Delaware's September primary, Witzke was not the state GOP's favored candidate. Republican Jim DeMartino had the backing of the state party, but lost to Witzke by 14 percentage points.

The scenario was reminiscent of Delaware's 2010 U.S. Senate race, in which former Republican governor Mike Castle was expected to be a shoo-in for the Senate seat, which Biden vacated when he became vice president.
But Christine O'Donnell ....upset Castle, shocking the state. Coons beat her handily in the general election....
Witzke, with her extreme "America First" platform and unabashedly anti-immigration rhetoric, makes O'Donnell, who made national headlines with her "I'm not a witch" ad, look tame.
And yet the 32-year-old, who had no prior experience running for office before this election, received a greater percentage of the Republican votes in Kent and Sussex counties than O'Donnell did in 2010. O'Donnell had also run against Biden for U.S. Senate in 2008.

That's from this Delaware Online article: 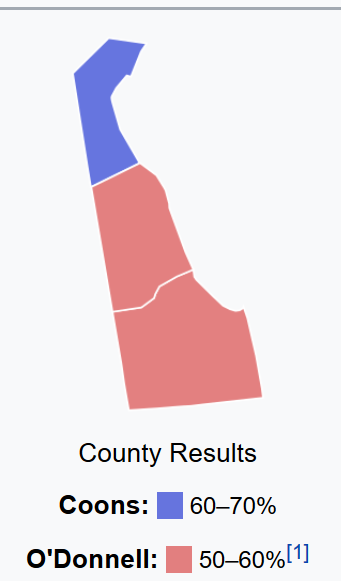 Witzke got a slightly lower percentage of the vote that 2010 and 2014 GOP candidates, but turnout meant that she got 50 percent more actual votes from Delaware Republicans than O'Donnell in 2010, and twice as many as the 2014 candidate. Delaware counties, as above, are either red or blue politically—see the map at right from the 2010. Witzke is very popular with people who vote Republican.

Witzke,  unlike many Establishment Republicans, favors a moratorium on legal immigration, on the sensible grounds that there's been too much of it lately.

She's also willing to engage with us here at VDARE.com (we're journalists, and interview people) which infuriates the Left.

What Witzke should do, and in fact, what she should already have done, is declare for the House Of Representives  election, which is in only two years. Delaware is one of those unpopulous states with two senators and one representative, and Democrats aren't going to get more popular over the next two years, whatever the outcome of this election is decided to be.

Both Tom Tancredo and Ron Paul proved that one representative can make a difference. Why not Lauren Witzke?