African Overpopulation Is Revealed in Conflict over Resources

Sunday’s front page on the New York Times features an important story that looks at the perilous situation in Africa, where overpopulation’s effects are being seen in local warfare over food resources, particularly land. The farmland is becoming depleted, while a skyrocketing number of people fight over what’s available for use. 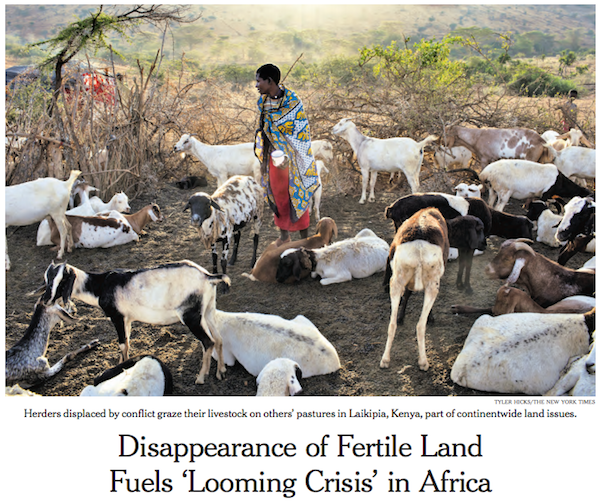 The story focuses locally on Kenya which has many of the same problems as large areas of Africa — overgrazing and overfarming caused by the growing number of hungry people lead to conflict. The drought now occurring eastern Africa accelerates the process of desertification, further reducing the available land.

The article does not mention the number of Africans who are pushed by difficult circumstances to head north to Europe, as many already have. And they come from throughout the continent.

Africa’s population growth guarantees that huge numbers of illegal migrants will continue flooding into Europe. The possibility of four billion Africans by 2100 should focus Europe on defense now before it is completely overrun.

LAIKIPIA, Kenya — The two elders, wearing weather-beaten cowboy hats with the strings cinched under their chins, stood at the edge of an empty farm, covering their mouths in disbelief.

Their homes — neat wooden cabins — had been smashed open. All their cattle had been stolen. So had their chickens. House after house stood vacant, without another soul around. It was as if some huge force had barreled into the village and swept away all the life.

Sioyia Lesinko Lekisio, one of the elders, had no doubts who did this. Swarms of herders from another county had invaded, attacking any farm or cattle ranch in their path, big or small, stealing livestock, ransacking homes and shooting people with high-powered assault rifles.

“There’s nothing we can do about it,” he said. “They want our land.”

Kenya has a land problem. Africa itself has a land problem. The continent seems so vast and the land so open. The awesome sense of space is an inextricable part of the beauty here — the unadulter- ated vistas, the endless land. But in a way, that is an illusion.

Population swells, climate change, soil degradation, erosion, poaching, global food prices and even the benefits of affluence are exerting incredible pressure on African land. They are fueling conflicts across the continent, from Nigeria in the west to Kenya in the east — including here in Laikipia, a wildlife haven and one of Kenya’s most beautiful areas.

Large groups of people are on the move, desperate for usable land. Data from NASA satellites reveals an overwhelming degradation of agricultural land throughout Africa, with one recent study showing that more than 40 million Africans are trying to survive off land whose agricultural potential is declining.

At the same time, high birthrates and lengthening life spans mean that by the end of this century, there could be as many as four billion people on the continent, about 10 times the population 40 years ago.

It is a two-headed problem, scientists and activists say, and it could be one of the gravest challenges Africa faces: The quality of farmland in many areas is getting worse, and the number of people squeezed onto that land is rising fast.