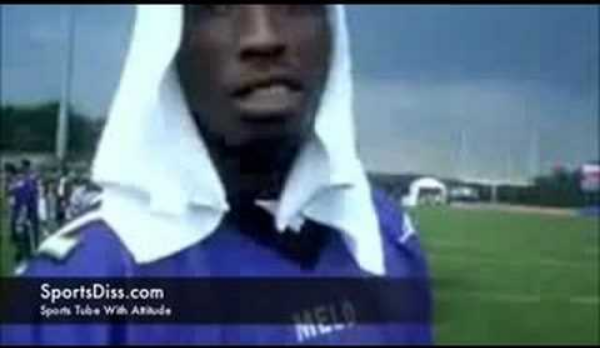 Dallas Mavericks star Josh Howard caught on home video refusing to honor the National Anthem as it's being sung to start a charity event. Why? Quoth the celebrity athlete, to the camera:

"The Star Spangled Banner's going on right now and I don't celebrate that sh*t. I'm black."[More].

Some variation of this theme is fairly popular in the African-American community, which feels that America is bad because it used to have slavery, and that American history is bad because slavery was going on somewhere while Washington was crossing the Delaware, and and while American troops were fighting at Fort McHenry. Therefore the national anthem is bad, too.

Probably the classic statement of this view is that of Malcolm X, who, in a famous speech, said "We’re not Americans, we’re Africans who happen to be in America. We were kidnapped and brought here against our will from Africa. We didn’t land on Plymouth Rock—that rock landed on us,” a line he may have got from Cole Porter. Sam Francis put it like this, in a July 2001 column about Henri Brooks, an African-American legislator in Tennessee who was refusing to recite the pledge of allegiance.

"The attacks on the Confederate flag and similar Confederate symbols are not aimed at the Confederacy or even at slavery and its legacy but at America itself and even more broadly at the white race. Since the attacks on the Confederacy began, we have also seen similar attacks on the Declaration of Independence (it didn't "include blacks") and Abraham Lincoln (a "racist" whose efforts for emancipation were too little too late), as well as others. The view of America that incites such attacks is precisely that voiced by [Civil Rights activist Lawrence] Guyot: that slavery is "ingrained" in American history, and since slavery is a dog that cannot be allowed to sleep undisturbed, any and every symbol of America must be stripped away."

In an earlier column, Enemies, Not Friends, Of Confederate Flag Want War, May 5, 2000,Sam wrote about NAACP activists who would chant "Your Heritage Is Our Slavery" at anti-Confederate flag demonstrations. He said

"Of course, in saying that, they are actually saying that American blacks are not really part of American civilization, which is defined in large part by the heritage its past created. If all black Americans can see in the American past is their own slavery, oppression and exploitation, how can they claim to be part of the nation? And why would they want to be?"

That, broadly is the position of the Reverend Jeremiah Wright, and it's the position taken by many African-Americans. It's more or less why Muhammad Ali refused to fight for his country. It's even the default position of Michelle Obama, who said, as her husband approached victory in the primaries, "for the first time in my adult life, I am proud of my country."

It is not, however, the position taken by Barack Obama. (Except on the  cover of the New Yorker, which doesn't count.) Barack Obama's position is that America will be just fine...if he's elected.