As I said below, the poster of a German girl preparing to have a German baby isn't the best AfD poster—this one is: 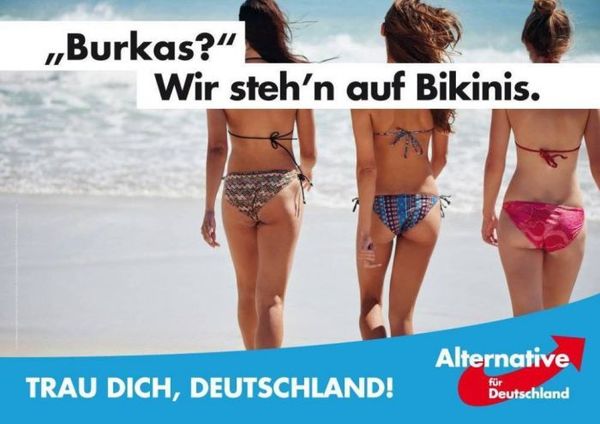 I kind of like this one, too: "Burka? Rather have Burgundy!"

The "Burgunder" refers to the German Burgundy wine, not the French one. Again this comes from Bikinis Over Burkas! Provocative Posters Boost AfD In German Election Campaign, by Damien Cowley, Gateway Pundit, September 11, 2017.

The Alternative for Germany doubled down on misogyny and Islamophobia in a new national campaign.

They are convinced that (a) German women having German babies is literally Hitler, and (b) pictures of women in bikinis and dresses are "misogyny" in a way that the Muslim culture and religion isn't.

Heading back into the German language for a moment, you may know that the traditional dress in Bavaria is, for men, lederhosen short pants and suspenders, with of course an alpine hat; for 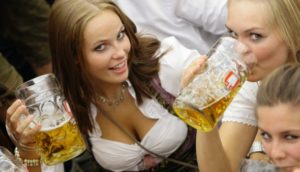 women, it's a dress called the dirndl, with full skirt, bare arms, and a plunging neckline. Well, the Germans are now striving to make their culture more acceptable to the million and a half Muslims they invited in last year to share the bratwurst and butterkartoffel. So they've come up with a variant on the dirndl: wait for it … the burkirndl.

The burkirndl is in the same relation to a dirndl as a burkini is to a bikini: minimal flesh display, long sleeves, high neck, and of course a full head covering. 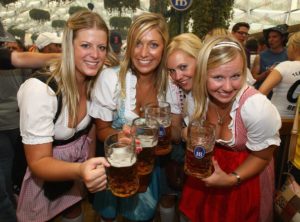 Muslims can now feel at home in Bavaria, wrapped up modestly in their burkirndls as they quaff beer at Oktoberfest.

Wait a minute, though; Muslims aren't allowed to drink beer, are they? And shouldn't there be some similar accommodation for Muslim men, so they won't be embarrassed about showing their bare knees? Burklederhosen?

Multiculturalism sure isn't easy. It's important to keep trying, though!