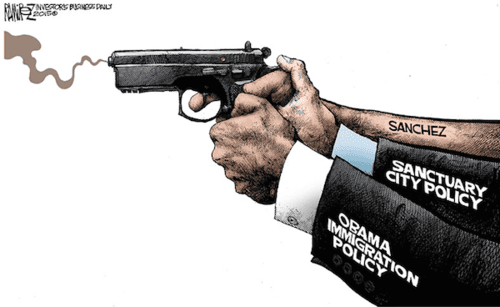 Jason Riley, a writer for the Wall Street Journal, is a big time amnesty enthusiast. But his recent piece pointed out a strong impetus for cities adopting sanctuary policies, namely the threat of an expensive lawsuit from leftist monsters like the ACLU. Some cities have been sued for cooperating with the feds to deport criminals because the ACLU says it is unlawful.

Riley appeared with Stuart Varney on Wednesday to explain.

Here is the part of Riley’s article that pertains to the ACLU lawsuits aimed at releasing dangerous alien criminals onto American streets:

If San Francisco had been more cooperative with federal authorities, Kate Steinle might still be alive.

This month the administration watered down Secure Communities, renamed it the Priority Enforcement Program, and promised local jurisdictions that the DHS would only issue detainers for felons or other perceived threats to public safety. This may help stem the growth of sanctuary cities and improve federal-local cooperation, but it’s no guarantee. Cities are also under pressure from groups like the American Civil Liberties Union which maintain that cooperating with the federal government on immigration enforcement is illegal.

Court rulings in Oregon and Pennsylvania last year went against local authorities who had detained arrestees for an additional period at the request of the DHS. In Oregon, a federal judge ruled that Clackamas County officials violated the rights of a woman arrested for ignoring a restraining order when they turned her over to DHS officials. The county settled the case by paying the woman $30,000 and picking up her court costs. In a Pennsylvania case involving a man arrested on drug charges, the Third Circuit Court of Appeals ruled that local authorities are not required to honor federal detainers. The man sued and was awarded $145,000 in damages and legal fees.

Other cities are taking note, said Mr. Rosenblum. “This local jurisdiction fear of lawsuits, there’s something to that. It’s a big issue, especially in the Ninth Circuit, where the Oregon case was. After that, you saw a big wave of California, Oregon and Washington state counties opting out.” [. . .]

San Francisco doesn’t need any threat of lawsuits to coddle illegal alien criminals, as its behavior has shown in the past, like its special protective programs for “juvenile” Honduran crack dealers and the murder of Tony Bologna and his two sons by a previously arrested but not deported illegal alien MS-13 gangster.

Most other cities are not so extreme, yet the threat of cash-sucking lawsuits from the spawn of Satan in the ACLU has moved their policies to the dark side.

The A.P. had a more detailed story last week:

The term “sanctuary city” has become a rallying cry for conservative Republicans seeking stiffer immigration laws. They characterize such places as havens where those in the country illegally are protected from immigration authorities.

The reality behind the phrase is that while some cities actively thumb their noses at federal immigration policies, many refuse to enforce them not because of any moral obligation to immigrants; they fear lawsuits.

Since the fatal shooting of Kathryn Steinle on a San Francisco pier allegedly by an immigrant who was released from jail even though U.S. Immigration and Customs Enforcement sought to deport him for a sixth time, the debate over how to handle cities and counties that refuse to cooperate with immigration authorities has reached a feverish pitch.

On Thursday, House Republicans passed a bill aimed at punishing cities that refuse to share information with federal immigration authorities, which the White House threatened to veto. While the bill doesn’t specifically address the release of immigrants sought by federal authorities for deportation, the Republicans are pitching other legislation to do so.

While notably liberal San Francisco has openly declared itself a haven for all immigrants regardless of their legal status, some of the cities and counties that have stopped detaining immigrants for ICE are politically conservative and are not trying to shield residents from deportation.

The city of Huntington Beach, California, which is predominantly white and Republican, stopped honoring the hold requests last summer for purely legal reasons. A federal court ruling in Oregon said so-called immigration detainers, which ask local police to hold immigrants suspected of living in the U.S. illegally for up to 48 hours, were not sufficient reason to keep someone in jail.

“We don’t have any policy or anything that prohibits our folks from interacting with ICE. We just follow the law,” said Police Chief Robert Handy, adding his officers don’t generally ask about immigration status because it doesn’t relate to their cases, not because they’re protecting anyone. “If they go get a warrant, we’ll hold them in our jail. If they ask us to go help for a search warrant on a drug house, we’re going to help them.”

San Francisco declared itself a sanctuary city more than two decades ago and continues to advertise itself as a place of refuge for immigrants. In 1989, the city passed an ordinance banning officials from enforcing immigration laws or asking about immigration status, unless required by law or court order. In 2009, it began issuing municipal identification cards that can be used to obtain a public library card and sign up for parks programs.

Today, San Francisco is one of more than 200 jurisdictions that have stopped fully honoring detainers.

The localities span a broad spectrum on how far they go to welcome immigrants or whether they’re trying to assist them at all. A big distinction is the reasoning behind local detainer policies. Places like Cook County, Illinois, and Santa Clara County, California, are trying to cultivate trust of police in immigrant communities. Others, such as San Bernardino and Riverside counties in California, cite fear of getting sued.

“When you use the term sanctuary city, it implies a policy decision that’s been made about how the city should engage with the immigrant community, and most of the detainer policies were adopted to address the legal concerns,” said Jennie Pasquarella, a staff attorney with the American Civil Liberties Union of Southern California.

Mark Krikorian, executive director of the anti-illegal immigration Center for Immigration Cities, acknowledged the difference but said the net effect was similar whether a city wanted to work with ICE or not.

“Some may cooperate here but not there. Some may cooperate on certain matters but not other matters. But any jurisdiction that does not cooperate fully with federal immigration authorities seems to me qualifies as a sanctuary city,” he said.

Last year, a spate of localities that had long worked closely with ICE stopped honoring detainers in response to the ruling in Oregon. In response, immigration authorities said they would start asking police to simply notify them when a suspected illegal immigrant is about to get released — not necessarily detain them. They believe the new approach, combined with a focus on more serious offenders, will lead to better collaboration from local law enforcement.

In populous Southern California, immigration agents have tended to work more closely with sheriff’s departments that run the county jails, where most serious offenders wind up. Smaller city jails like the one in Huntington Beach usually serve as short-term holding centers for misdemeanor arrests.

In the Orange County jail, deputies regularly interview immigrants about their legal status as part of a close collaboration with federal immigration agents. They tell them when someone they’ve flagged for possible deportation is due to be released. But the agency doesn’t hold people on the detainers due to legal concerns, said Steve Kea, assistant sheriff of custody operations.

“We are not a ‘sanctuary’ jurisdiction by any existing definition,” said Orange County undersheriff John Scott.