Ability to Speak English Is Derided in... England

The word "racism" continues to morph like a deadly cancer beyond its meaning of prejudice based upon skin color. The misuse in this case centers on cabbies speaking English, though a language can be learned by anyone (even immigrants), while a person cannot change their race.

Obviously it is not racism to advertise the skill set of the driver. Prospective customers want to know that the cabbie will understand when they explain where they want to go. Communication is a central part of the job.

A racism row has broken out after a city's taxi drivers started displaying stickers in their cars saying they are 'English speaking'.

Up to a dozen drivers have been showing off the notices bearing the St George's Cross on the back windows of their cars in Southampton, Hampshire.

The small red and white sticker declares the cab is being driven by an 'English speaking driver.' [...]

Taxi driver Peter Ford, 48, said: 'It's just about letting customers know that the driver will actually be able to speak English, which isn't always the case.'Â

Fellow driver Chris Head, 49, added: 'I have no problem with the stickers.

'Lots of customers will wait at ranks until an English driver comes along because they want someone they can talk to.'Â

The aim of the complainers is to remove any responsibility of immigrants that they learn English adequately and assimilate to the society to which they have moved. The squawk squad objects to the social contract by which immigrants are admitted and given the rights of citizens on the condition that they assimilate at least partially to the majority community. Speaking the nation's language is the minimum requirement, but hostile foreigners won't even do that.

The signs also include the English flag, but in today's invaded Britain, no patriotic deed goes unchallenged. 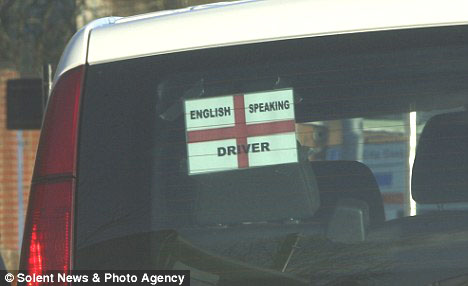