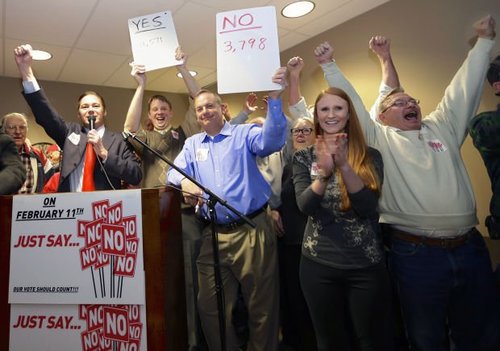 The Heroes of Fremont

The Patriots of Fremont Nebraska deserve a loud cheer: on Tuesday night

Fremont voters overwhelmingly have rejected an effort to repeal part of a controversial city ordinance that bans illegal immigrants from renting housing.

Of the 6,484 ballots cast in the Tuesday election, 59.6 percent voted to affirm the law while only 40.4 percent said it should go, according to unofficial election night results... Fremont voters first approved the ordinance by a 57 percent majority in a 2010 special election after supporters gathered more than 4,000 signatures to get it on the ballot. But the housing portion of the law has never been enforced.

Fremont is a once highly functional town which is being wrecked by the greed of the iniquitous Meatpackers.

…the breaking of powerful labor unions like the United Food and Commercial Workers in the 1980s allowed companies like Hormel, on Fremont’s southern edge, to begin recruiting large numbers of low-paid (and often undocumented) line workers. Their influx drove the Hispanic population in this part of Nebraska from less than 1,000 in 1990 to nearly 16,000 today, roughly 20 percent of the population in the state’s northeastern corner. (Fremont’s population in 2012 was 26,167.)

Who Belongs in Fremont, Nebraska? By Ted Genoways Harpers Magazine November 1, 2013 (This is a follow up to Genoways’ This Land Is Not Your Land Harpers Magazine February 2013 issue - a classic documentation of the social destructiveness of mass illegal immigration and Cheap Labor Lobby greed. Credit for the technical soundness of the Fremont ordnance belongs to Kris Kobach).

The second vote in Fremont arose because the effort by Business interests (one actually a slum landlord) to induce the City Council to ignore the first referendum was exposed and blocked.

Ordinance foes raised $71,000 in cash and in-kind donations, outspending the other side by a ratio of more than 11 to 1 in the lead-up to election day. Supporters of the ordinance raised little more than $6,000, mostly in small amounts.

Fremont might be in Switzerland! Of course in such a tight knit community the standard MSM repression technique does not work: the immivasion disaster is too obvious. But at the State level, Nebraska has the usual problem.

Victories are rare, and welcome.  VDARE.com salutes the Patriots of Fremont