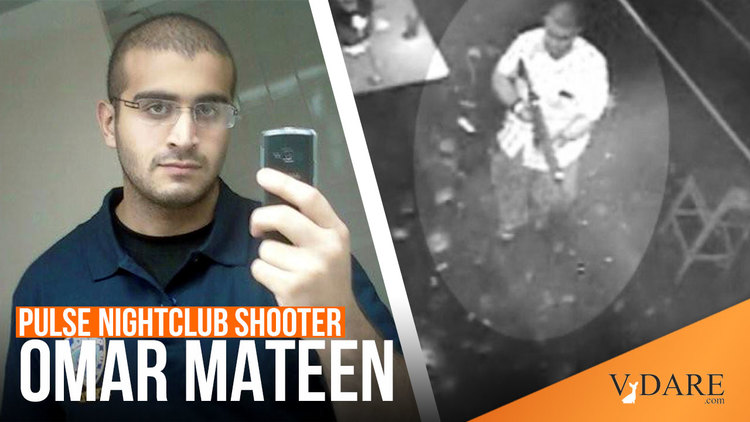 A Charter Member Of The Afghan Refugee Hall Of Fame: Omar Mateen

Earlier: How Many “Home-Grown” Muslim Attacks Before A Muslim Immigration Moratorium—And Expulsions?

Mateen was born Omar Mir Seddique on November 16, 1986, at Long Island Jewish Medical Center in New Hyde Park, New York, to Afghan parents. His father, Mir Seddique Mateen, is from Herat who emigrated from Afghanistan in the 1980s and became a naturalized US citizen on November 17, 1989. Seddique Mateen was a secret informant for the FBI at times between January 2005 and June 2016. Seddique Mateen also owns a non-profit company named “The Durand Jirga, Inc.” based in Port St. Lucie, Florida, which was founded in 2010 where he hosted a political commentary show. His mother, Shahla Mateen, was taken into custody after she allegedly attacked her husband while he was brushing his teeth on the night of December 7, 2002. Both of his parents first settled in New York, having four children, including Omar. After being raised in New York for a few years, he moved with his family to Port St. Lucie, Florida in 1991. His family was described as being moderate Muslims and “all-American.”

Behavior in school
At a young age, Mateen displayed a preoccupation with violence … While at Mariposa Elementary School, a third grade teacher wrote that Mateen was “very active … constantly moving, verbally abusive, rude, aggressive … much talk about violence & sex … hands all over the place – on other children, in his mouth”. In the seventh grade, Mateen was moved to a separate class with the purpose of avoiding “conflicts with other students” and suffered from poor scholarly performance due to “many instances of behavioral problems”.

A classmate at Mariposa said that Mateen was a bully, disrespectful to girls and acted like he was better than his classmates. Another classmate reported that Mateen was bullied at school because of his weight and his Afghan heritage. His parents were described as “dismissive” of his poor behavior while his father “had a reputation for being disrespectful of female teachers and dismissive of complaints about his son”. In 1999, while Mateen was in the eighth grade, his teacher sent a letter to his father regarding an “attitude and inability to show self-control”.

Mateen began his secondary education at Martin County High School in 2000, and at the age of 14 was expelled after being in a fight in math class, where he was briefly arrested without being handcuffed and charged with battery and disrupting school, though the charges were later dropped. While a sophomore attending Spectrum, an alternative high school for students with behavioral issues, classmates told The Washington Post that Mateen cheered in support of the hijackers during the September 11 attacks and that he stated that Osama bin Laden was his uncle who taught him how to shoot AK-47s, all of this before knowing that bin Laden was the mastermind of the attacks. After his outburst, Mateen’s father arrived at the school to pick him up and slapped him in the face, with Mateen later being suspended for five days after the incident. Soon after the September 11 attacks, “he shocked other students on his school bus by imitating an exploding plane”, reported The New York Times.

A retired dean of Martin County High School, Dan Alley, said that they “tried to counsel him and show him the error of his ways, but it never had the effect that we were hoping for,” and that his father “would not back up the school, and he would always take his son’s side”. Mateen was later sent to St. Lucie West Centennial High School after getting into a fight with a student. By the time Mateen had returned and graduated from Martin County’s Stuart Adult Vocational School in 2003, he had been suspended for 48 days for being involved in fights and injuring other students.

Post-secondary education and employment
… Following the Virginia Tech shooting in April 2007, Mateen suggested in a corrections officer training class that he would bring a gun to class. P.H. Skipper, who was the warden at the institution, wrote that “in light of the tragic events at Virginia Tech officer Mateen’s inquiry about bringing a weapon to class is at best extremely disturbing.” Days later on April 27, 2007, Mateen “was involuntarily dismissed” from the program and never became a certified corrections officer.

Mateen then worked for British-based security firm G4S Secure Solutions in Jupiter, Florida, from September 2007 until his death….