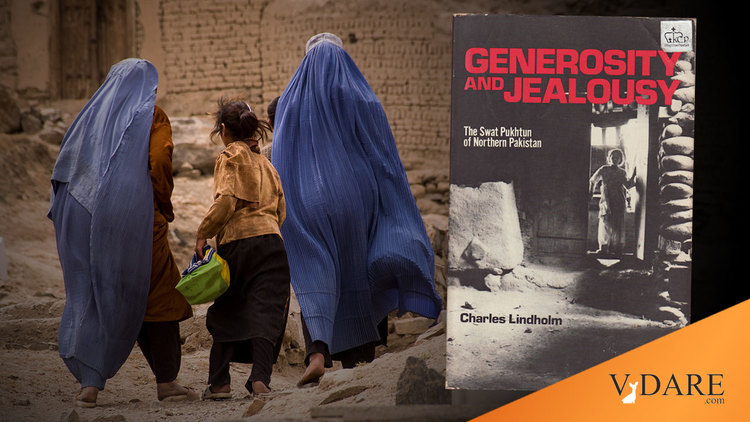 With the Taliban Back in the News ...

With the Taliban back in the news, here’s an iSteve blog post from 2006:

With the Taliban back in the news, I have an excuse for posting more items about the tribe in Afghanistan and Pakistan that provides most of the Taliban’s support.

By the way, this was Ezra Klein’s original conception for how he would make his fortune from Vox: rather than going through all the tedious effort of writing new news every day, Vox writers would just recycle and occasionally update their old stuff … but with attitude. Although skeptical, I also very much hoped that Ezra had hit upon an overlooked way to generate daily content.

But on some topics where the fundamentals never much change, such as Afghanistan, you can just dust off old items like this letter I received from an anthropologist 15 years ago:

The Pukhtun is never at peace, except when he is at war.

Women belong in the house or in the grave.

Women have no noses. They will eat s***.

One’s own mother and sister are disgusting.

Where there is the sound of a blow, there is respect.

When the floodwaters reach your chin, put your son beneath your feet.

While nuclear family life in Pakistan sounds hateful, and extended family life not much better, Pashtuns look forward to intimate friendships with strangers:

God, grant me a true friend who, without urging, will show me his love.

Curiously, the Pukhtun have a strongly idealized notion of friendship. They say that it is honorable for a man to lie for a true friend, even with his hand on the Koran (which means that the liar goes to Hell!). While other Pukhtun are potential allies, and often must be avenged for the sake of honor, they cannot be true friends, because the element of rivalry is too strong. The ideal friend is a foreigner, providing he comes as a guest, rather than an enemy. Lindholm, although no sociobiologist, argues that a universal human nature is rearing its head here—the desire for human connection expressing itself in the cult of friendship, in what is otherwise a bitterly individualist and cutthroat culture.

There’s a certain Lawrence of Arabia feel to this … Afghanistan sometimes seems like a cultural outpost of Arabia way off in Central Asia, a little like how Serbia can seem like Russia’s little cousin.