A Blessed Good Friday/ Innocent of Alaska Day!...Oh, And Passover 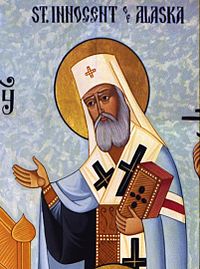 It has now become a multicultural must to step on Christmas by never mentioning it except in connection with other “holidays”, notably Hanukkah, aptly described by American Heritage's Frederic Schwarz (December 2000) as the “Jewish Kwanzaa.”

Somehow, however, the MSM neglects to provide the nearest Saint's day in the Christian calendar to each year's Rosh Hashanah, Yom Kippur and Passover—there are a lot of saints! So it has become a VDARE.com service (as so often) to fill the gap.

This year is one of those occasions when Passover actually coincides with the great if gloomy Christian celebration of Good Friday, the day of Christ's crucifixion. So there's perhaps more excuse than usual for bracketing them together.

March 30 also the feast of Saint Innocent of Alaska, which is also celebrated by the U.S. Episcopal Church of the U.S.A.. He was born in Siberia in 1797, worked as a missionary in Alaska, where he translated scriptures into the local language and traveled as far as the Russian settlement of Fort Ross in California, before ultimately returning and becoming the Metropolitan of Moscow, where he died in 1879.  At a time when we are apparently being led into confrontation with Russia, Innocent's combination of saintliness, scholarship, scientific curiosity and astonishing dynamism is a salutary reminder that Russia, for all its terrible history (Descendant Traces Path of Russian 'Apostle of Alaska,' by Peter Steinfels, New York Times, July 31, 1989), is umbilically connected to the great tradition of which the U.S. and Europe are the heirs.

VDARE.COM wishes all our readers a Blessed. We mean it.

Article
We Are All Puritans Now! 2020 Election Will Be Debate On Mayflower Anniversary/America’s Founding. Trump Will Win