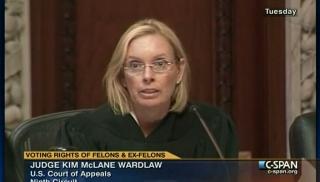 The always-helpful ACLU is reaping the fruits of its litigation to provide bond hearings for detained illegals fighting deportation.

A girl reported missing by her parents in Santa Clarita was found locked in the garage of a home where a convicted sex offender lived with his parents, authorities say.

In her April 2013 opinion affirming the need for such hearings, Judge Kim Wardlaw—of the also-helpful 9th Circuit U.S. Court of Appeals—intoned:

The same judge then got her robe all bunched up when Sarah Wilson, the DOJ lawyer arguing the bond-hearing case, mentioned the L.A. Times article in her argument. See Ninth Circuit Harshly Scrutinizes Law Enforcement Leak, Threatens Sanctions Against Department of Justice, by Ken White, PopeHat.com, August 20, 2015.

Which may not have been good tactics on Wilson's part, but Judge Wardlaw then decided she was more angry about being proven dead wrong in the L.A. Times than, you know, illegals sexually assaulting young girls. She all but accused the DOJ of "leaking" the story to the paper.

A quick Bing search shows us where the blonde-but-half-Mexican Wardlaw is coming from:

Mexican-American Roots People may not know it by looking at her, but the golden-haired Wardlaw is half Mexican. She is also, according to a letter she just received in the mail, the first Hispanic American woman appointed to a federal appeals court. Kim Anita McLane Wardlaw was born in San Francisco in 1954. Her father, a salesman, was Scotch Irish; her mother, an accountant, was born in the U.S. to Mexican parents. Her parents' marriage incited disapproval from both sides of the family. And her mother, Wardlaw said, faced some "pretty serious discrimination." Even though she identified equally with her Anglo and Latino backgrounds, Wardlaw said she was ostracized for being the only Mexican girl in elementary school. "I saw a lot of unfairness and injustice growing up," she said. "I have a strong sense of justice and a strong moral compass.I've always had that." Siding With Underdogs Wardlaw certainly has sided with the dispossessed in some of her most noted rulings. In a case that received national attention, Wardlaw ruled that it's cruel and unusual punishment for police to arrest homeless people at night when they have nowhere else to go.

Our champion of the downtrodden has even won an award from La Raza. Too bad Wardlaw's 'downtrodden' doesn't include 14-year-old girls sexually assaulted by illegals.