2Kevins With Grace & Steel: Is the Free Market Really Free?: Hilaire Belloc’s The Servile State; A Talk With James Fulford

Episode 38 of my podcast is now posted here (with copious links). In Part 1, my co-host Kevin Steel and I discuss Hilaire Belloc’s 1912 attack on capitalism, The Servile State. 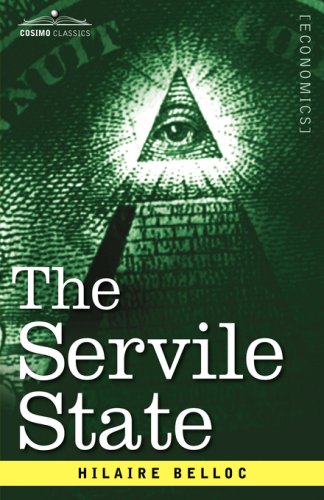 Belloc was a Frenchman and an Englishman, a furiously unreconstructed Roman Catholic, a poet (both serious and comic), novelist, historian and MP. He was a Great Man of English public life and, like Chesterton, H.G. Wells and Bernard Shaw, one of the Giants of the Edwardian Age. His economic views were derived largely from his mentor, Cardinal Henry Manning, Primate of England, who was hugely influential in the composition of Leo XIII’s 1891 encyclical Rerum Novarum (Of New Things), which rejected both capitalism and socialism as systems unbefitting the dignity of man.

Belloc proceeded from the assumption that de jure slavery is the default condition of human society. He argued that the High Middle Ages in England were one of the glories of history because control of the means of production was shared between the monarchy, aristocracy and peasantry. This idyll ended with the confiscation of the Church lands by Henry VIII, inaugurating a rush for spoils that resulted in, even before the Industrial Revolution, the reduction of the great majority of Englishmen to proletarian status. This consolidation of wealth by the capitalists was then imitated throughout the West.

The Servile State refers to what Belloc regarded as the de facto slavery of most of the English people in 1912. They worked, under conditions dictated by the capitalists for their own benefit, in order to forestall starvation, but they lacked the means (capital) to rise above destitution. Belloc predicted with great accuracy that the ameliorating efforts of the Fabian socialists and other reformers would serve only to further enrich the richest and reduce “liberty” to an empty slogan. He saw that regulation would work to the benefit of the capitalists (“regulatory capture” and “barriers to entry”) and that people without property would come to be treated scarcely different than chattel. His warning is especially timely in light of capitalist economic policy following the debacle of 2007-2008: “helicoptering” virtually free money to the banks in the vain hope that some of it will eventually trickle down to the servile masses.

In Part 2, I speak with VDARE’s own James Fulford. Therein, we consider the differences between the Alt Right, Dissident Right and Establishment Right, with special consideration to the delusionary world of the last named. We also discuss, among other things, Derbyshire’s Law of Political Stupidity, the link between high IQ and functional autism, Donald Trump’s (perhaps) surprising support among blacks and Hispanics and whether the Donald is likely to delight or disappoint his supporters. We conclude with an examination of the enigma of Barack Hussein Obama II and speculation as to his post-presidential career.