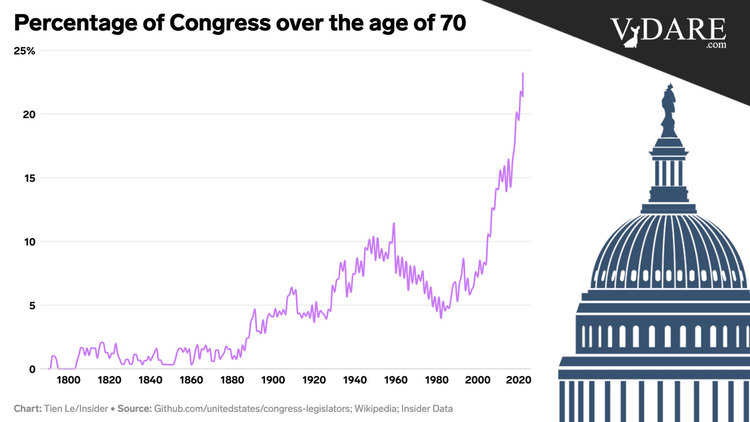 6 charts that explain the United States’ march toward gerontocracy

America’s gerontocracy is disconnecting Congress from the rest of the country, an Insider data analysis reveals.

And it’s happening in general in Congress: the youngest Congressmen are older than they used to be.

A few suggestions for why:

Elites are living longer. The working class is not, but the kind of high-energy people who get elected to Congress tend to be healthy-livers.

There has been a certain amount of medical progress in addressing the woes of age. For example, Ridley Scott will turn 85 this year, but he’s still making pretty good big budget movies. He had knee replacement surgery in 2010, and I wouldn’t be surprised if he’s had cataract surgery too.

There are more women in Congress now, and women live about five years longer than men.

Middle class and above–society is on a “slow life path” trend with people staying in school longer before entering the work force, so it’s not surprising they stay at work later in life too.

There used to be a legal and cultural set of presumptions that people would retire at age 65. That has gone away in many fields, such as academia.

People will talk about Baby Boomers, but my impression is that the current fashion for naming 18-year-long generations starting from 1946 is arbitrary, hard to remember, and too long. It would have been simpler for generational theorists to simply categorize people by the decade of their births. E.g., we have had four Presidents born in the Forties (Biden 1942, Clinton, Bush 2, and Trump in 1946), but none born in the Fifties.

In general, people born before the Baby Boom, or at its very beginning, tend to have wound up leading the most kick-ass lives. E.g., Paul McCartney is packing football stadiums at age 80. It was fun to start out in your career older and cooler than the hordes of Fifties kids who’d look up to you.

Hence 40s folks like Joe Biden and Nancy Pelosi aren’t confident that 50s folks really are ready yet to have the reins turned over to them.

Finally, I suspect the rise of diversity has slowed down the transfer of power, especially among Democrats. The coalition of the fringes can’t agree on who comes next, so they procrastinate by keeping the same old same olds in power. We saw that in California where in the mid- 2010s, the five most powerful Democrats were Bay Area whites of elderhood: Jerry Brown, Diane Feinstein, Nancy Pelosi, Barbara Boxer, and party boss John Burton. California Democrats have since finally done some transitioning to diversity in leadership, but it’s not clear if that’s working out. Whatever you want to say about them, the above five were probably each better at politics than Kamala, much less whoever it was that replaced her (Alex Padilla?).