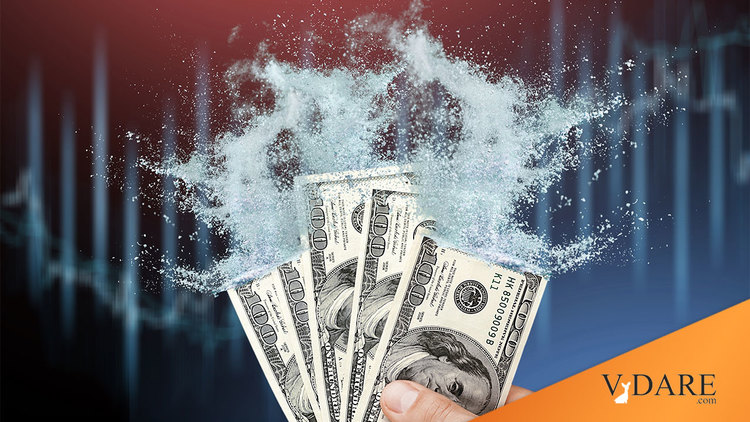 The latest federal consumer price index report two days ago surprised Wall Street by how bad it was, with food inflation being particularly severe. The Standard & Poor’s average dropped 4.3% in the trading session, from a total value at the opening bell of $4,111 billion to 3,932 billion at the close, for a one-day loss of 177 billion in those 500 stocks, on new assumptions that the Fed would feel compelled to raise interest rates higher.

Here’s a business question: why does Wall Street wait around for the government to calculate the inflation rate for it each month? Why not pay market researchers to calculate inflation each week? The current situation is reminiscent of the 1983 movie Trading Places, in which the bad guys are trying to steal the government’s orange juice report. If it’s that valuable, why not just pay the orange growers something for their data, aggregate it, and sell it to Randolph and Mortimer Duke and their rivals the day before the government releases its report?

This isn’t the first time I’ve asked this question. Back in 1991 the market researcher company where I worked, which tracked the checkout counter scanner data from 3,000 supermarkets and drugstores, had me work with the Wall Street Journal on a weekly column based on our data. What the WSJ wanted was hot info on the marketplace successes and failures of consumer packaged goods firms, half of whom were our clients. We were reluctant to supply that and risk peeving clients and potential clients, so I developed a bunch of case studies of interesting data we could supply that wasn’t about clients.

Bits and pieces I remember is that among the top 20 markets, hair dye sales were highest per woman in Dallas and lowest in Boston. Out of the 52 weeks of the year, condom sales were highest in the week leading up to New Year’s Eve. In contrast, chalk sales were highest in early April. (I think what’s going on is that kids come outside to play in early spring and ask their parents for colored chalk to mark up the sidewalks for skipping games and the like.)

But my big discovery was that the government inflation rate appeared to be overstated. We didn’t track the whole economy, but we tracked a significant part of consumer prices. I don’t recall, but it wasn’t trivial, something like one-fifth to one-third overstatement in the categories we tracked.

The problem I found was that the government’s methodology was too rigid. Here’s a stylized example of how the Bureau of Labor Statistics was measuring consumer price inflation back then: on January 15, they’d have their employees go to the local supermarket and buy a six-pack of Coke. Then on February 15, they’d buy a six-pack of Pepsi. Then Coke again the next month and so on.

This worked fine in an old-fashioned system in which prices were fixed most of the time. But as information technology improved, marketers were playing around with prices more.

At that point in history, CPG firms were increasingly exploiting price-insensitive shoppers and catering to price-sensitive shoppers by offering bigger and bigger temporary deals and more coupons. So if you bought Coke when it was on deal and Pepsi when it was on deal, you did increasingly better each year around 1990. Alternatively, you could say that if you ignored deals and just bought your favorite brand, you were increasingly exploited by rising prices. But our data showed that Coke and Pepsi sales gyrated wildly by week depending upon which one was on deal.

My vague recollection was that academics figured that out over the course of the 1990s and, perhaps, something was done to make CPI calculations

I proposed that we market our data to Wall Street, which tended to be richer than consumer packaged goods firms. How much would big banks pay for a preview of the inflation rate?

But then I went off and did some other stuff for a while, and that never happened.

The bigger thing that happened was that the inflation rate got boring. Swings in the CPI had been massive news in the 1970s and 1980s (I can recall talking to my cousin on Christmas Day 1982 with us both agreeing that Christmas shopping prices had been surprisingly reasonable that year—I should have invested heavily in the stock market with that street-level preview that the big inflation of 1973-1982 was coming to an end.) But over the next few decades after 1991 , the inflation rate was surprisingly snoozeville.

But now it’s not anymore.