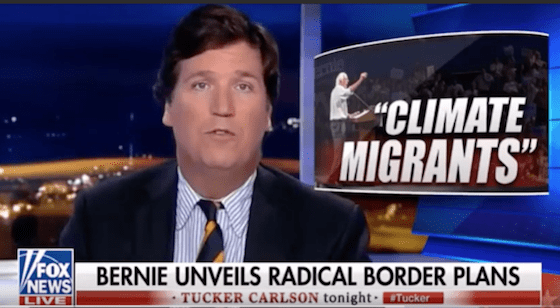 Democrats are so desperate to import future liberal voters from abroad that the D-candidates will violate any alleged principles to import as many newbies as possible. The 2020 Democrats have gone off a cliff to be “pro-immigration” by extending the idea of immigrant to include anyone of the world’s nearly 8 billion inhabitants who might decide to move here. Add to that the Democrat promise of free healthcare for all, including illegal aliens, means there is a huge incentive to reach stupid-generous America.

The latest immigration pitch comes from Bernie Sanders who wants to welcome thousands of “climate refugees” to the US which assumes major suffering somewhere on the planet because of extended bad weather, drought or some other regional hiccup. I remain convinced that climate change is often trotted out as a cause of problems that can more properly be attributed to world population growth. Plus, climate change is a flexible enough problem to allow many government-imposed solutions, definitely a plus for Democrats.

Tucker Carlson examined the ramifications of Bernie’s plan for “climate migrants” on his Monday show. 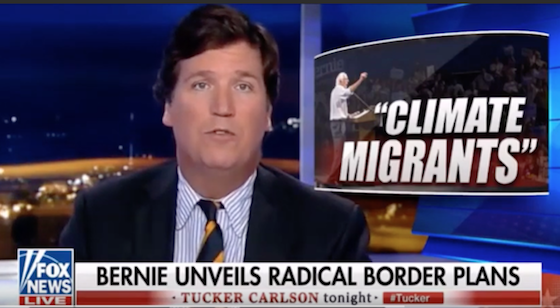 We humans now number more than 7.7 billion persons, more than double the world’s population on the first Earth Day in 1970 when the number was 3.7 billion — that’s quite an uptick in just under 50 years.

Top Democrats claim to believe in climate change as a big problem that is worsened by the United States, yet they want to increase America’s population substantially by immigration. Go figure.

TUCKER CARLSON: Well a couple years ago, Bernie Sanders described open borders as a Koch brothers proposal because it is literally a Koch brothers proposal — it’s a libertarian idea — he was right. Mass migration reduces wages for low-skilled workers but now Sanders has changed his mind. His campaign has released an immigration proposal that reads like something the Koch brothers would write: it would halt deportation or abolish enforcement of our borders, abolish ICE and create a new category for something called “climate migrants.”

Justin Haskins is a research fellow at the Heartland Institute. He joins us tonight to explain what a climate migrant might be, and more pressingly, Justin, why would a climate migrant have a right to come to my country?

JUSTIN HASKINS: Well apparently climate migrants, which I don’t even think are a real thing, are essentially a category of people from third world countries, from developing nations, who are so supposedly suffering as a result of climate change, man-caused climate change.

Now, I don’t believe that anybody is actually suffering from man-caused climate change, but Bernie Sanders’ proposal would have 50,000 people, 50,000 at minimum, come to the United States from around the world, who are suffering from climate change, supposedly, in just the first year — and over the course of his presidency, hundreds of thousands of people, because supposedly this is good for climate justice or something along those lines.

CARLSON: And also, if you cared about the environment, which I personally do emphatically care, and actually go outside once in a while, unlike most people on the left — why would you want a crowded country?

Isn’t crowding your country the fastest way to despoil it, to pollute it, to make it a place you wouldn’t want to live?

HASKINS: Yeah absolutely. Look, the left is schizophrenic on a lot of issues, and this is one of those issues.

It doesn’t make any sense at all to have an open door, open border policy where you’re bringing people into the United States when people are supposedly destroying the planet, destroying the environment, where we’re we’re talking about population control in some parts of the left right now.

Alexandria Ocasio Cortez says that she stays up at night, and she doesn’t think she can have children because she’s worried about the effect it’s having on climate change, but Alexandria Ocasio Cortez wants to bring in hundreds of thousands, maybe even millions of people from around the world into the United States. How does this make any sense?

CARLSON: And actually, I mean this with sincerity, I feel sorry for her because I think she means it. I think that the movement that was started to clean up the environment which most people, again very much including me, totally for that has morphed into this weird cluster of neuroses where people actually think they can’t have children because of climate, and it’s sad. I mean it really is — paging Dr. Freud — I mean these people need help. Well I guess we all need help our society’s going crazy.

Justin, thank you for your part in making it a little bit less crazy