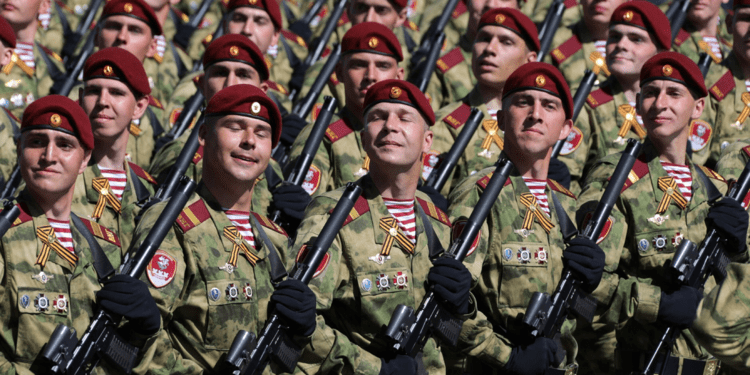 Putin To Have Genetically Selected Army

The Russian military will be using genetics to assess that most unpredictable of human qualities: how a person will react in combat.

Want to be a Russian paratrooper or tank commander? Then you’d better hope you have the right genes.

The Russian military will be assigning soldiers based on their “genetic passports.”

“The project is far-reaching, scientific, fundamental,” Alexander Sergeyev, the chief of Russia’s Academy of Sciences, told Russian news agency TASS back in the summer (English translation here). “Its essence is to find such genetic predispositions among military personnel, which will allow them to be properly oriented according to military specialties.”

“It is a question of understanding at the genetic level who is more prone to, for example, to service in the fleet, who may be more prepared to become a paratrooper or a tankman.”

Interesting. Are there any traits where genetic testing is as good right now as regular testing?

For example, I knew a guy who enlisted in the Navy, but got discharged after months of expensive training because he was permanently seasick when at sea. That might be something that eventually could be predicted genetically and would be worth saying: Nah, you are probably never going to get over your seasickness, so you should go enlist in the Army instead.

But most of the time it makes sense just to give somebody a phenotypic test.

For example, George W. Bush scored poorly on his Air Force entrance test on the parts involving artificial horizons and other flying-related knacks. He did okay on other parts, especially leadership personality, so they let him become a pilot. But while he managed to fly a dangerous fighter without killing himself, he was never particularly good at it and gave up flying when he got out.

So, the paper-pencil tests they’ve got already are pretty good.

On the other hand, a big military like Russia’s can probably acquire a sample size of over a million in a decade of genetically testing all new recruits. And they’ve got a ton of real world data on servicemen, so why not correlate DNA with performance and see what shakes out?

Civilian GWAS broke the million sample size barrier with Lee et al last year, but the problem facing these kind of studies is a lack of dependent variable types of data. Lee focused on “educational attainment” because it’s a question asked on a large percentage of medical forms. But there aren’t all that many such common questions from medical studies. In contrast, modern militaries know an absurd amount about the performance of military personnel so it would be very tempting to scan the DNA and see what correlates with what.